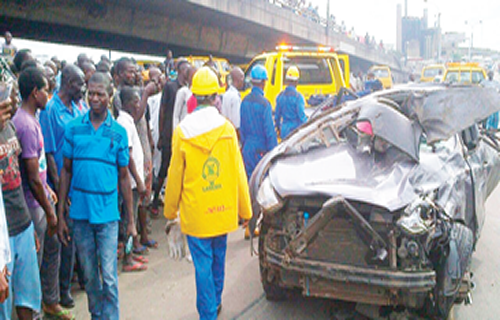 4 persons including 3 suspected armed robbers were yesterday confirmed dead after their vehicle fell on a mechanic.

The incident occurred around 2:20pm at the Iddo Terminus near Eko Bridge.

It was gathered that a gang of give armed robbers who snatched a grey coloured Hyundai JX35 marked SMK485CM from a priest, were fleeing when the vehicle skidded off the bridge and fell on a mechanic, Nwamba.

The pedestrian and three of the robbery suspects were said to have died instantly, while one escaped with injuries and the last suspect was rushed to the hospital. 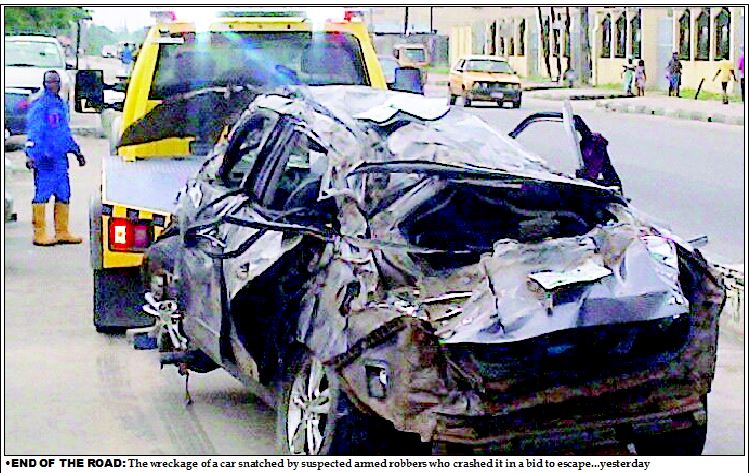 It was gathered that a locally made pistol, a priest’s robe and a plague were found in the vehicle.

“Preliminary investigation revealed that the vehicle was suspected to have been snatched at gun point with five suspected armed persons. Three of the suspected armed robbers died immediately, one escaped with injury while the fifth person was taken to the hospital.

“The dead bodies were taken to the mortuary, while vehicle was towed to Denton Police State, Ebutte Metta. Items found on them include: One locally made double barrel pistol with five live cartridges; one laptop; handset and a dollar note.”