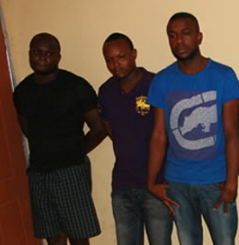 3 fraudsters have been arrested and arraigned before a Lagos Magistrate Court for allegedly hacking into the account of First Bank Plc and fraudulently withdrew the sum N39 million.

The accused persons were arrested on the order of the Assistant Inspector General of Police, AIG in charge of Zone 2, Onikan, Lagos, Adamu Ibrahim following a complained by the management of First Bank Plc through the Head of the Department of Foresic Auditors, Mr. Akhanolu Solomon.

Police prosecutor, Inspector Molo informed the court in charge no: C/49/2017 that the accused persons committed the alleged offence on the 25 January, 2017 at First Bank Plc, Oshodi Branch, Lagos.

Molo told the court that the accused persons forged the fund transfer documents of First Bank Plc, hacked into the account of the bank and fraudulently withdrew the sum of N39 million and shared it.

He said that the management of the bank uncovered the fraud when it audited its account book.

All the accused pleaded not guilty to the alleged crime and the Chief Magistrate, Mrs. A.O Komolafe granted them to bail in the sum of N5 million each with two sureties each in like sum.

Komolafe adjourned the case till 19 September, 2017 for mention and she ordered that the defendants be remanded in Ikoyi prison, Lagos pending when thy would be able to fulfill their bail conditions.

44 Children Rescued From Suspected Child Traffickers In Kaduna [PHOTOS]
Nigerian Senators Are The Highest Paid In The World, They Are Unarmed Robbers – Obasanjo