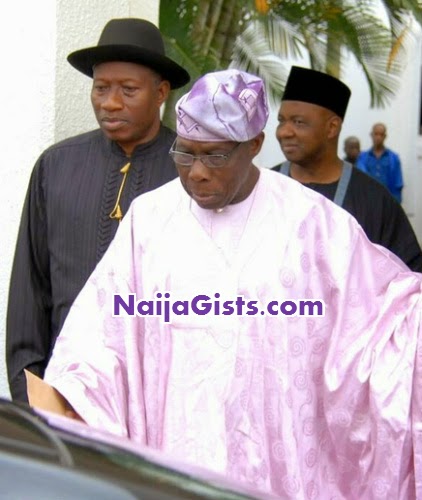 August 17, 2017 – Nigerian Senators Are The Highest Paid In The World, They Are Unarmed Robbers – Obasanjo

Ex- President Olusegun Obasanjo Thursday in Ibadan described members of the National Assembly as a “bunch of unarmed robbers”, over their huge salaries and allowances.

Obasanjo, who hit hard at the National lawmakers, said the current legislators are one of the highest paid lawmakers in the world, despite the fact that an estimated 75 percent of Nigerians populace live in poverty.

He added that the arm of government should be roundly condemned.

The former president spoke at the book presentation of Prof. Mark Nwagwu entitled: “I am Kagara, I Weave the Sands of Sahara”.

The event, which held at the University of Ibadan, had Obasanjo as the Chief Host while the former Minister of Education, Dr Obiageli Ezekwesili chaired the occasion.

Stressing that he is expecting another round of bashing from the federal lawmakers, the former President said he would continue to lambast them for constituting a huge percentage of the nation’s overhead cost.

He lamented that the nation would hardly develop when about 90 percent of revenue was spent on overhead costs, rather than on capital expenses.

Speaking on the ongoing impasse between the federal government and the Academic Staff Union of Universities (ASUU) over the 2009 agreement, Obasanjo, said government allowed itself to be stampeded into signing agreements without full consultation within government.

However, he added that regardless of that, the government was bound to implement whatever agreement reached with workers’ unions.

“Government allows itself to be stampeded into signing agreement particularly when one group or the other withdraws their service and go on strike. After the agreement has been signed, without full consultation within government, and implementation becomes an issue.

“But an agreement is an agreement whoever the agent is that signed that agreement on your behalf, you are bound by it. You may now have to renegotiate to have a new agreement but the agreement earlier signed remains an agreement.

“The way we are going about spending all our revenue to pay overhead, we will not develop. And we will have ourselves to blame. Ninety percent of revenue is used to pay overhead, allowances, salaries and not much is left for capital development.

“In a situation like that, we have to rethink.

“It is even worse for the National Assembly. They will abuse me again but I will never stop talking about them. They are a bunch of unarmed robbers.”

“They are one of the highest paid in the world where we have 75 percent of our people living in abject poverty. They will abuse me tomorrow and if they don’t, maybe they are sleeping. The behaviour and character of the National Assembly should be condemned and roundly condemned.”

In her remarks at the occasion, the Chairperson of the event, Dr. Ezekwesili, remarked that the 289-page book, was a tool for Nigeria to examine the extent to which she had lost her values and culture.

She decried the loss of community spirit, warning that Nigeria must never negotiate her values.

According to her, the world was currently such that humanity tried to figure out what happened to morality.

The book reviewer, Mr Nwachukwu Egbunike, in his remarks on the book noted the theme of feminism and how women navigate life intricacies towards achieving success in life.

Egbunike also lauded the author’s ability to weave around different concepts in both the spirit and natural world.

The event was attended by both academic and non-academic staff of the university who were on hand to celebrate the author and his wife, Helen.