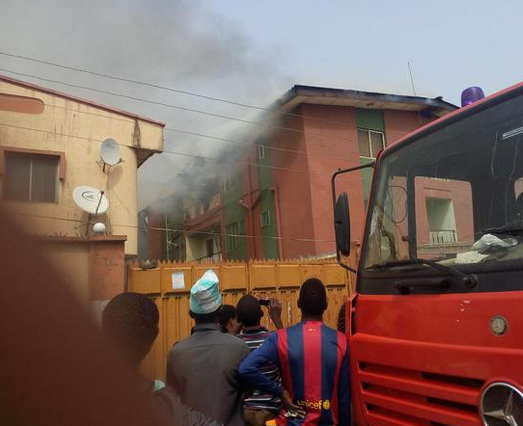 3 children of the same parents on Saturday night died in an inferno that destroyed their three-room-self-contain apartment in Egbeda-Akowonjo area of Lagos State.

The incident caused by a candle-lit occurred around 10:00 p.m., at No 20, Fakoya St, . Vulcaniser Bus Stop, Egbeda Akowonjo.

It left the three kids, identified as : Ifeoma, 9; Emeka, 7; and Udeoma, 3 dead.
The Director of Lagos State Fire Service, Razak Fadipe, confirmed this to NAN in Lagos on Sunday.

He said that the fire service was not called to the scene on time, and advised people to stop the use of candle to lit their house.

“We got a distress call and when we got there, we discovered that, it was a building that was on fire.
“The building is located at No 20, Fakoya St, . Vulcaniser Bus Stop, Egbeda Akowonjo, a suburb of Lagos.
“The fire was caused by a candle, which was lit by their father, while he went to see his wife and the family’s new baby in the hospital,” he said.

Fadipe said that the charred body of the dead children had been removed to a mortuary by the police from Shasha Division.

The fire service boss appealed to people in Lagos to desist from using candle in their homes, as it could be very dangerous.

Continue Reading
You may also like...
Related Topics:fire, housefire, lagos