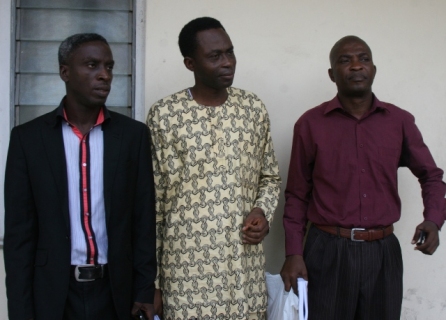 March 18, 2013 – 3 Nigerian Pastors Arrested For Fraud By EFCC In Lagos Plead Not Guilty

They were alleged to have obtained the sum of $25,000(Twenty-Five Thousand United States Dollars) from Angel Estate Residents Development Association, Ojo, Lagos as processing fees for sourcing foreign loan for them to purchase an expanse of land at Nkwelle Ezumaka Estate in Anambra state.

One of the charges reads: “that you Pastor David Nnanso Eshiet, Pastor Samson Okemona Ugbara and Pastor Adesanmi Richard Aderoju and Prince and Zion International Service Limited on or about 27 October, 2011, at Lagos, within the Ikeja Judiciary Division with intent to defraud obtained the sum of $25,000 (Twenty Five Thousand United States of America Dollars only) from Angel Estate Resident Development Association of D10/58 ASPAMDA Trade Fair Complex, Ojo Lagos by falsely representing that it is part payment of the cost of processing $100,000,000.00 (One Hundred Million United States of America Dollars) foreign loan you had sourced for them for the purchase of an expanse of land at Nkwelle Ezumaka Estate, Oyi Local Government, Area of Anambra State, which representation you knew to be false.”

When the charge was read to the defendants, they pleaded not guilty.

Prosecution counsel, Ben Ubi asked for trial date and prayed the court to remand the accused persons in prison custody. But counsel to the defendants, F.O Udokporoh, however urged the court to admit his clients to bail.

Justice Adebisi fixed March 27, 2013 for hearing of the bail applications and May 22, 2013 for trial. She ordered that the accused persons be remanded in Kirikiri maximum prison.

Official press release by the EFCC.