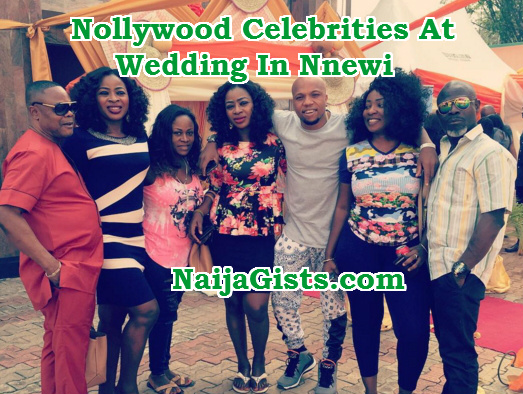 The quiet town of Nnewi in Anambra state has been hit with another tragedy less than 4 days after a gas plant explosion killed over 100 people.

On Saturday the 27th of December 2015, a policeman ran mad and shot three Nollywood actors during the traditional ceremony of Danduko group of companies boss at Uruagu-Nnewi in Anambra.

According to an eyewitness who identified himself as Ifeanyi, the couple were dancing and getting sprayed with naira and dollar notes around 6:30pm when an out of control cop shot 3 of the wedding guests.

A guest ran inside to inform the celebrants of the tragedy that had just happened outside, leading to the abrupt end of the ceremony.

It was later discovered that the policeman had actually shot 3 Nollywood actors who came to the occasion dead.

The bodies of the victims were later taken to the Nnamdi Azikiwe University Teaching Hospital in Nnewi.

The identities of 2 of the victims have not been disclosed.

One of the victims, a budding actor identified as Charles Okocha was rushed to the ER ward of the hospital. 2 bullets have been removed from his body but his condition is still unknown.

While others argued he has died, his close friend singer Kelly Hansome told fans he heard that he is still responding to treatment. He promises to update us on his condition soon.