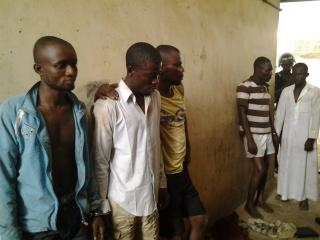 Officials of Ogun State Police have arrested a five-man gang of kidnappers, who have been terrorising residents of Ijebu area of the state for allegedly abducting a man who just returned to the country from abroad.

Three members of the kidnap gang, who claimed to be Pastors, while the fourth said to be a herbalist were said to have deceived their victim with an offer of spiritual assistance for a personal problem he was having. The fifth member of the gang was said to have been killed during an exchange of fire with the police at their hideout.

The police recovered one locally made pistol loaded with cartridges and one Cherokee jeep with registration number. LND 25 CE from the suspects.

Parading the suspects, the state Police Public Relations Officer, Muyiwa Adejobi said members of the gang were arrested on Tuesday at Ita-Marun, Ijebu Ode by men of the SARS led by the Officer-in-Charge, Tijani Mohammed.