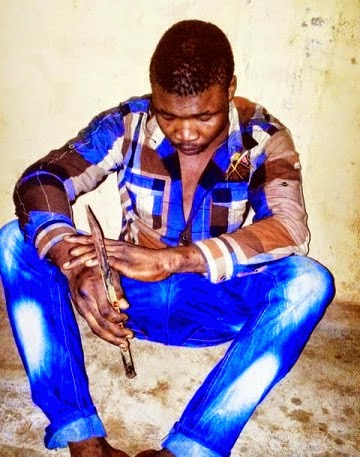 May 28, 2015 – Grandmother Arrested While Assisting Armed Robber Son To Get Treatment From Herbalist In Ogun State

The police in Ogun have arrested a 70-year-old woman, his son and two others for alleged armed robbery in Abeokuta, the state capital.

The septuagenarian, Moninola was arrested along with the gang members for allegedly assisting his 35-year-old son, Modiu, who sustained gunshot injuries during an operation, to get treatment from a herbalist.
The 70-year-old woman and the gang of suspected armed robbers said to have been terrorising Abeokuta, the state capital for some time were arrested by State Anti-Robbery Squad (SARS) operatives on Tuesday.

Parading the suspects, the state Police Public Relations Officer, Muyiwa Adejobi told newsmen that Modiu, 35; Wale, 30 and 28-year-old Fatai had been on the wanted list of the police and were eventually tracked down by the men of SARS.

Adejobi said a locally made pistol was recovered from the members of the robbery gang.
He, however, said Moninola, who is the mother to one of the suspects, Modiu was arrested along with the robbery suspects for allegedly taking his son to a herbalist for treatment to extract the bullets and pellets lodged in his body when he was shot during a robbery operation.

Adejobi added that the 70-year-old woman would soon be charged along with the three robbery suspects to court.