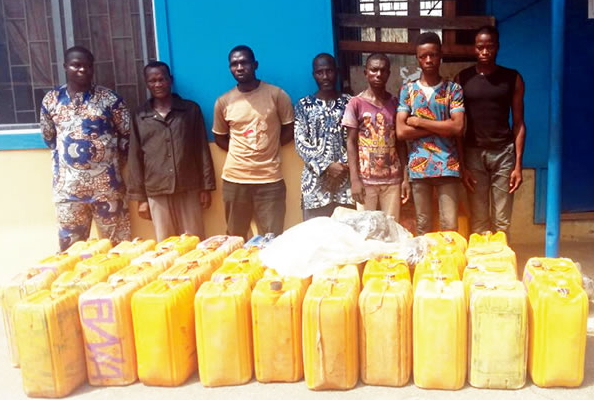 The Beninese were apprehended with four others – Omosebi Olorunwa, Daniel Akinwunmi, Rafiu Balogun and Samson Adams – on Wednesday at Owode-Apapa, in the Badagry area of the state while they were smuggling the stolen fuel from the country.

We learnt that motorcycles and 10 vehicles, including a Volkswagen car marked, XV859KRD, and 113 jerrycans of petrol were recovered from the suspects.

One of the suspects, 18-year-old Adams, who said he was an admission-seeker, told our correspondents that his role was to assist the gang to fill the jerrycans with fuel, adding that he did not know that it was an offence.

He said, “I want to go to school. My father is late and my mother does not have money. I decided to work so that I can raise some money. What I usually do is to fill the jerrycans with petrol at a filling station.

“Some people buy the fuel and smuggle it from Nigeria into neighbouring countries. I collect N1,000 every day. I have so far saved N10,000.”

The Beninese, Elijah, said, “I was taken to the scene by my boss. He said he had a job for me, but he abandoned me immediately he saw the police.”

Four other Nigerian citizens were also arrested with stolen fuel.