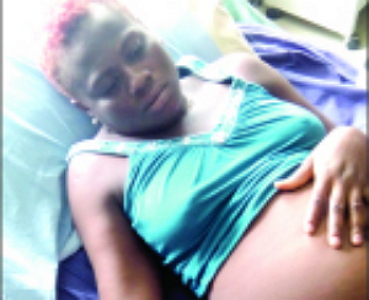 The operatives allegedly stripped the woman naked after accusing her of resisting arrest. She was eight months pregnant.

The victim has since been delivered of a premature baby.

But the police authorities said the operatives that carried out the assault have been nabbed and are in detention.

She was allegedly assaulted before she was dragged to the police station. Her family members later rushed her to Safe Hands Hospital, Old Ojo Road, Amuwo, Lagos, after she allegedly passed out at the station.

Chika told the reporters on her hospital bed that about 8pm on Sunday, she left two of her kids at home and was heading to a shop at Agboju, in Oriade Local Council Development Area (LCDA) to buy things for the house.

“I suddenly noticed a bus coming behind me. The bus obstructed me and one of the occupants came out, pointed a gun at me and shouted that I should park. He threatened to shoot if I didn’t park.

“When I discovered that they were policemen, I tried to explain to them that I wanted to park my car, so that I could enter the shop. This incident happened at Pako Bus Stop along Ojo Road where there were so many tankers and lorries parked indiscriminately.

“I begged the one that was putting on a black T-shirt to allow me to go, as I was pregnant. Then the next thing was, he called me a prostitute. I was angry and reminded him that I am a married woman with two kids. I warned him not to call me a prostitute again. But the policeman dragged me down from the car, even as passers-by and my friend were begging him to let me go.

“While I was screaming for help, saying, ‘I am not a thief,’ they tore my trousers. I was not putting on any underwear, so they stripped me naked. They were dragging me, saying I must enter their vehicle, but I refused. They dragged me on the road, but I insisted that I would go with them in my car. In the process, my legs and my stomach were bruised,” she said.

She said she was eventually bundled into the police vehicle and taken to the station, even in her virtually naked state.

“On getting to the police station, I pleaded with them to allow me get a cloth from the shop. I was begging them so that I could meet any woman nearby to give me a wrapper because I was naked. People around were asking me what happened, and I replied that the policemen did that to me, even though I’m not a thief. Because, with the way I was treated, one could mistake me for a thief. I had to bite one of the policemen on the back.

“I then entered one provision store near the station where I met a woman who gave me this gown. My phone was in my vehicle and I told the police officers that they should allow me call my people to inform them that I was at the station, but they refused. They said I must be put in the cell. I was running around, trying to get a phone, but no one would give me their phone because they thought I was a mad woman.

They were just looking at me. I then saw a young girl, and I spoke to her in Igbo, telling her I was not a thief. She was the one that gave me her phone and I called my sister, because her number was the one I could easily recall. I told her what was happening, so she came with her husband that night and met me at the police station. They were asking me what happened, but her husband said we had to find those who assaulted me. So, we went into the police station and met the Divisional Crime Officer (DCO). He told us to explain what happened, but as I was talking, I felt dizzy and passed out,” she said.

Her sister, Favour Ifebuzor, explained that she rushed down to the police station as soon as she got the distress call from her sister.

“When my husband and I arrived at the scene, I saw my younger sister sitting on a pavement, looking weak. So we took her into the station to find out what happened. My sister told me that she was feeling weak and dizzy, but the policemen rudely told her to stand up and explain what happened. As she tried to explain, the man at the counter was saying, “why don’t you have respect for an officer in uniform? Why did you slap a policeman?” My sister said it was when the policeman forcefully held her cloth and dragged her that she did that, because it’s lawful for one to defend oneself from danger. So, as they were forcefully quizzing her, I told the policeman that she was weak and could slump.

“My sister was also whispering to me that she was feeling weak. So she fell on the ground. And she was crying, saying “O my baby, my baby.” Then she started foaming in the mouth. The policemen there were saying, “she is pretending. Let her stay there, she is not serious.” They were just watching, including the DCO. My husband was saying, “You people have killed someone’s wife and mother. Take her. She is your responsibility.” My husband was dragging me so that we could go, but I told him to have patience. I said, let me get some water, because my sister was dying. I went to one shop and bought a sachet of water, came back and started pouring it on my sister’s head and body, but she was not responding. Instead, her tongue was coming out, foaming.

“I was so scared because her stomach protruded straight and her body was getting cold. I had to beg one man to help me look for a vehicle. When he got the vehicle, I told the policemen to help me put her in the vehicle, but they were just looking at me. I was confused. The driver of the vehicle and the man that went to get him were the ones that helped me put her in the car. The biscuits I bought for my children and my phone, I didn’t even know where I kept them. It was when they put her in the vehicle that I remembered that my phone was on the counter at the station, and I went to the counter and picked my phone.

“I then told the policemen that I was taking her to the hospital, and that if anything happened to her, I would hold them responsible. The vehicle had already left. They took her to Safe Hands Hospital, and my husband and I walked to the hospital. When we got here, the doctor told us she was going into labour, and that we needed to move her to the General Hospital. I was confused. Then I called my sister who also came with her husband. But we heard the policeman who had come there telling the doctor that she was okay.

At the hospital, the doctor on duty, Okoawo Innocent, who spoke on behalf of the management, admitted that Chika was rushed into the hospital half conscious. He said all necessary tests were carried out, noting that the tests showed that the baby was intact. He, however, said that the victim would be kept under observation.

But the doctor’s assertion was proved wrong, as Chika soon started bleeding. To save her life and that of the baby, she was wheeled into the theatre where the baby was forced out of her. The baby, it was gathered, is alive but in an incubator.

Confirming the incident, Lagos State Police Command spokesman, Kenneth Nwosu, a deputy superintendent of police (DSP), assured that investigation was ongoing to ascertain what actually transpired. He said the suspected policemen had been arrested and were in detention, adding that they would be prosecuted according to the law guiding the force.

[Reported By By Chioma Igbokwe and Chizoba Ikenwa, Daily Sun]