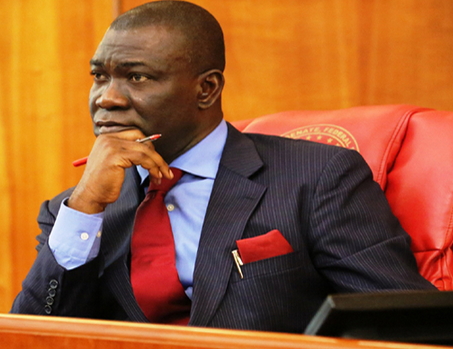 PDP as a party remains the greatest enemy of Nigeria, and those sympathetic to its course should be treated like an outcast. It is a shame that every measure put in place to correct the PDP destructive tendencies of bad governance, impunity, poverty, perpetual darkness, retrogression, massive corruption, dispel and hopelessness is seen by these individuals as witch hunt of some sort, forgetting that Nigerians could no longer be taken for a ride, thank God the Change we yearned for is finally here but to have

Senator Ike Ekweremadu as Deputy Senate President is unacceptable to our collective sensitivity. Of course every politician is greedy by nature but this is not enough reason for PDP to lay seize to what is constitutional meant for APC given the supremacy of party majority.

I dare to say that it is criminal for PDP to think of reaping the dividend of PMB goodwill where it did not sow. Whereas it is time she accept the reality of being an opposition party rather than reminding Nigerians of its 16 years of atrocities. What transpired on the 9th of June 2015 which saw Senator Ike Ekweremadu clinching the position of Deputy Speaker was the handiwork of desperate- mischief makers through orchestrated manipulation of the Senate standing rules.

I urge the IGP Solomon Arase to speed-up the investigating progress as regards Senator Ike Ekweremadu involvement in the forgery scan that pave way for the opposition in the power sharing scheme of thing. Nigerians are eager for the outcome of the allege dubiosity, as they can never be a sacred cow under this government, but one thing that I am sure of is that either IGP Solomon Arase or Senator Ike Ekweremadu must loose his job on this matter, do not get me wrong? this is simple logic, if the formal must continue in office he must not be compromised as this is a big test for him given the enormous responsibilities placed on the Nigeria Police Force under his watch.

Days of impunity are over and if PDP thinks it is business as usual they should take a second look at PMB antecedent with penchant for zero tolerance for corruption, in the past PDP as a party had forced illegality down the throat of many Nigerians, and if one dare talk DSS would go after him or her but thank God the reverse is today the case, yes PDP should accept being opposition and allow the Change Nigerians voted for to thrive.

If 8years of being a Deputy Senate President with several trillions and no tangible bill passed to the benefit of Nigerians, I wonder why greed would not let Senator Ike Ekweremadu be on what was never his? In fact, I expect by now he ought to have tender his resignation letter and apologize to Nigerians for hijacking the Change we all stood for under the scorcy sun and in the rain.

What more?The greed of these politicians has rendered the activities in the National Assembly comatose with recess upon recess over who get what and how? yet they take home jumbo salary while ordinary Nigerians wallow in abject penury.

Beclouded with dreaded sentiment the Southerners would never see anything wrong with illegality and quick to criticize every good move to repositioning Nigeria from the shackle of dungeon Jonathan led- government had subjected Nigerians to with his clueless style of leadership where corruption and impunity persist, surprisingly, the southerners were comfortable with it and resisted every move to hamper APC from emerging, but events in few days from now where cabinet shall be constituted would place every single corrupt-official on his toe.‘

SAVE YOUR TEARS FOR THE RAINY DAY’ this is my message for these corrupt-officials who have short-change Nigeria by helping themselves to the tone of billions of Naira, whereas, we all know their tricks, they shall cry woe to high heaven for persecution, witch- hunting, marginalization and whatever reasons but genuine Nigerian shall prefer probity for national growth and development other than unnecessary distraction where serious business of recovery our loots abound.

What I expect from every meaningful Nigeria is to support PMB in the fight against corruption because if he does succeed Nigeria future is guaranteed, and we should be wary of these corrupt-politicians who are now embarking on campaign of columnist to justify their loot, and if you are not careful you could easily fall prey of their ploy by investing your emotional intelligence.

Mark you! they never considered your plight while looting, ironically, their children ride the best of cars, attend the best of schools Abroad, while Nigerian tertiary institutions lacks the intellectual supportive-program with unending strike, yet they want you to rise against this government in their defense for probing them. The unoccupied massive and expensive buildings scattered all over Abuja is a proceed of looted funds, yet Nigeria is having building-deficit to accommodate millions of homeless Nigerians.

It is a crime against humanity for group of individuals robbed our collective existence for their selfish-end. If these looted funds are kept in Nigeria to revamp our industries it would have been better but they take these monies Abroad to enrich or burst their economy at the detriment of jobless Nigerians.