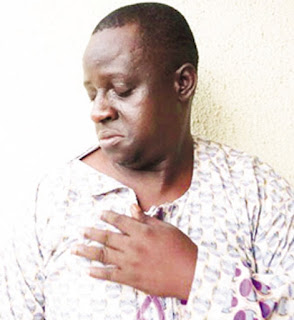 January 26, 2018 – 3 Police Officers Beat Up Lagos Lawyer, Tear His Clothes For Petitioning IGP Against Them

Lagos based lawyer, Barrister Dayo Abudu has accused some policemen from the Area N Police Command, Ijede, Ikorodu, of assaulting him.

Abudu said he was beaten up; his clothes torn and mobile phone smashed by three sergeants following an argument over his clients’ interest in a land matter.

He identified the policemen as Moroof Omo-Ikuaye, Sherifat and Kola, who, according to him, were members of a team led by Inspector Yetunde Fasuba.

Abudu told The Nation that the incident occurred last Saturday.

“On January 18, my clients’ family were working on their land at Gberigbe and a team of policemen headed by one Moroof Omo-Ikuaye of Area N Police Command, Ijede, Ikorodu, came to stop the work on the land, claiming that they were investigating the ownership of the land. They took away the work tools of the bricklayers working on the land.

“I was briefed by my clients and I didn’t see any reasonable suspicion of commission of crime, which would have warranted the police to have arrested my clients pursuant to Section 35 of the Constitution. So, the next day, I filed a fundamental rights suit on their behalf at the Lagos High Court, Ikorodu Division, against the police and served them an advance copy.

“But, to my surprise, the police went on intimidating, harassing and threatening my clients with arrest and detention.”

Abudu said on January 20, another team of policemen came to the land and invited his clients for talks, purportedly on the orders of the Area Commander, Area N Command.

“I got to Area N Command at about noon and I went straight to the office of the police team investigating the title to my clients’ land.

“There I met the head of the team, Inspector Yetunde Fasuba and her team members, namely Sergeant Moroof Omo-Ikuaye, Sergeant Sherifat and Sergeant Kola, while both of my clients were handcuffed together as if they were armed robbers.”

According to Abudu, the police were forcibly trying to extract a confessional statement from his clients.

“Inspector Yetunde then asked me to leave her office, which I resisted on the grounds that my clients have the right to have their lawyers around while writing any statement pursuant to Sections 35 and 36 of the Constitution. Section 9(3) of the Administration of Criminal Justice Law (ACJL) of Lagos State, 2015 permits suspects to have their lawyers available and present while writing confessional statements.

“The argument got so heated that Inspector Yetunde instructed Sergeant Moroof Omo-Ikuaye, Sergeant Kola and Sergeant Sherifat to forcibly pull me out of their office, while she went to the Area Commander’s office.

‘’Sergeant Kola pulled the chair I was sitting on beside my two clients and I fell on the floor. Sergeant Moroof Omo-Ikuaye pushed and hit me, so I picked my phone to call one officer that I know in Abuja to talk to those policemen, but I was quickly attacked by Sergeant Kola, who said I was recording the scene and, in order for them to stop the supposed recording, he smashed my phone against the wall and broke its screen.

“Sergeantre beating me and dragging me to the Area Commander’s office.

“Sergeant Moroof Omo-Ikuaye threatened to kill me with charms and he went back into their office, brought out a concealed handkerchief and used same to wipe my face and quickly returned it to his office.

“I was seriously intimidated, harassed, molested and treated like an armed robber. My Infinix phone was broken, while the screen guard of my Tecno phone was also broken.

“I was asked to write statement about what happened and a file was opened for that.”

Abudu said other policemen around abused and made fun of him, accusing him of writing petitions against them to the Inspector-General’s office in Abuja.

He added: “My clothes were also torn. The Area Commander, who earlier said he was coming back to hear us, couldn’t make it back to the office, so he called the Area Crime Office to release me to come back yesterday.”