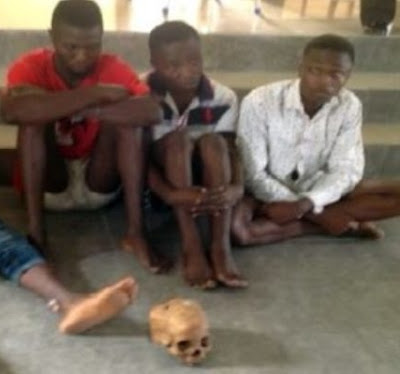 3 suspected ritual killers were on Saturday arrested in Ado Ekiti following a tip off from the member of the public.

The suspects identified as Bidemi Awolusi, Musa Ismaila and Isiaka Muhammad were caught by men of Operation Flush at Igirigiri area of Odo Ado in the capital city of Ekiti state.

The trio were said to be the ritualists terrorizing residents of Ado Ekiti and environs.

Items recovered from them include a single barrel gun, tortoise shell, blood soaked panel saw suspected to have been used to behead some of their victims, mask, assorted charms, hammer, clothes of victims and animal skin.