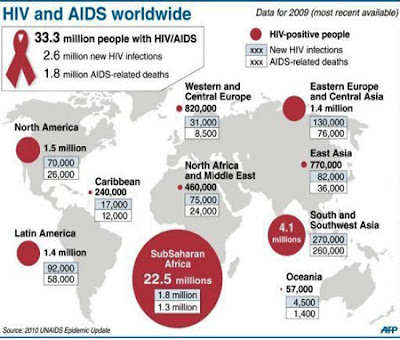 According to the latest report released from World Health Organization (WHO), as at 2012 , 33.5 million people are currently living with HIV worldwide.

About 2.7 millions were newly infected by HIV virus this year alone.

2 Million people died as a result of the virus in year 2008.

The HIV virus usually grows into full blown Acquired Immune Deficiency Syndrome, AIDS, of which no cure had been found.

According to the WHO report, youths who are sexually active, whose age range from 15-24 were found to be infected more than older people. Half of the youths make up the 33.5 million persons living with HIV virus in 2008.

The report added that Nigeria ranked third in the number of HIV infections in the world while the highest prevalence HIV/AIDS age group is between 15 and 24 years.

Similarly, in sub-Sahara Africa, there are 3.2 million young people living with HIV.

In an effort to reduce the prevalence of HIV/AIDS in Nigeria, two non-governmental organizations, NGOs, the Mike Okonkwo Educational Youth Initiative in collaboration with Journalist Against AIDS, JAAIDs, recently organised a campaign programme for youth at the mega Football Viewing Centre of the Federal College of Education, Akoka, Yaba, Lagos, southwest Nigeria.

In his remarks, the co-ordinator of Mike OkonkwoEducational Youth Initiative, Pastor Johnnie Agbaje, said that the programme was organised to empower the youth spiritually, educationally, medically and in all aspects to ensure proper development of Nigeria’s future leaders.

He stated that the time and place of the event was strategically chosen to reach out to youth that are lovers of football at the common viewing centre where the lovers of football exchange ideas, opinions, and perspectives on various football clubs, players and countries that participate in various matches.

He emphasized that HIV/AIDS constitute the greatest challenge of our time.

Agbaje added that for this reason, the church has decided to educate teenagers and youths in and outside the church on HIV/AIDS.

Speaking on the prevalence of HIV/AIDS by age group, the programme co-ordinator from JAAIDS, Ben Adeoye, pointed out that the 2005 survey revealed that the highest prevalence of HIV was among those on the age bracket of 25-29 years, while 4.9 per cent are in other age groups.

“To reduce this high prevalence, it must be the responsibility of all sectors to educate the youths on how HIV is spread, prevention, and management to reduce the its scourge in the society ’’

Prevention is better than cure.

HIV/AIDS can be prevented through total abstinence, faithfulness to one partner, use of condom, avoid sharing of sharp objects’’ he counselled.

Adeoye advised the youths who have never undergone voluntary testing for HIV/AIDS to do so in their own interest.

He seized the opportunity to correct the wrong impression that HIV could be spread through sweat, shaking of hands and eating from the same plate. He said all these misconceptions are untrue.

“Everybody should undergo voluntary testing to know their HIV/AIDS status, AIDS does not show on the face,” he said.

Continue Reading
You may also like...
Related Topics:aid, hiv, infection, living with, no of people, WHO, World, worldwide