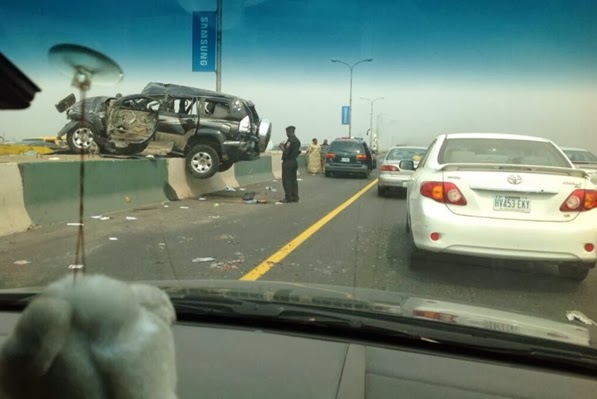 Pictured above is the scene of a fatal car accident that claims the life of a staff of Access Bank in Lagos state Nigeria.

It happened yesterday on the popular Third mainland bridge. The guy driving the Prado Jeep was over-speeding when one of the tyres busted.

The impact landed the Prado jeep on the median.

The prado jeep, which was inbound Oworonshoki, was on high speed when one of its tyres burst. The vehicle somersaulted many times before landing on the median. The driver of the vehicle died on the spot as his head was fractured, while his blood spilled all over the vehicle. The second guy survived and people moved him into another vehicle.

The survivor of this fatal crash was immediately rushed to Gbagada general hospital for treatment while the deceased corpse had been taken to a local mortuary.

Drivers should avoid over speeding. It is a killer. RIP!