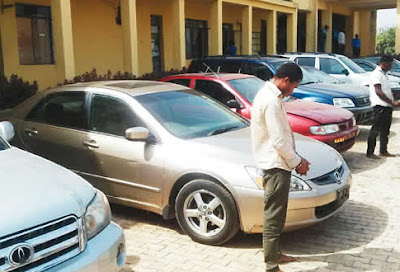 The convicts specialised in hijacking petroleum tankers and selling the contents in different parts of the state. Before their arrest in December 2009, the quartet and one other at large, had robbed several people at different times on Isua-Idoani Expressway in Ose Local Government Area of the state.

According to the prosecution counsel, Mr. John Olowookere, the convicts hijacked a DAF truck with registration number XN 810 ABC laden with 33,000 litres of petrol on the same road but were later apprehended by the police.

Olowookere said three of the convicts drove the truck away to dispense the content while the remaining two led the driver and the conductor to the bush where they were tied until they disposed the petrol and sold the truck. The convicts stood trial on a four-count charge of conspiracy to commit armed robbery, armed robbery, murder and illegal possession of firearms contrary to Section 6(b) of the Robbery and Firearms (Special Provisions) Act R11, Laws of Federation, 2004.

In his ruling, the presiding judge, Justice David Kolawole, of the Special Criminal High Court within Olokuta Medium Security Prison, said the prosecution counsel was able to substantiate the case against the convicts.