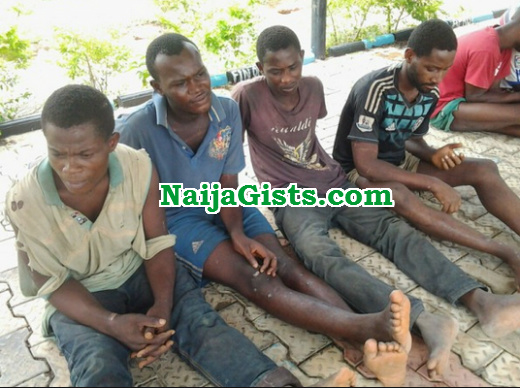 A man who identified himself as Pastor Greatman Ita and 4 other Black Axe confraternity members have been arrested by Edo Police officials for killing a welder identified as Abu Iboje.

The cultists identified as Obiosa Noble, Sylvester Ikhifa, Lazarus Anthony, and Okeh Godstime allegedly murdered the welder at his shop located at Upper Sokponba road in Ikpoba-Okha LGA of Benin.

The pastor however denied being a cultist, he said police arrested him after someone in the area identified him as one of the cultists.

One of the suspects, Lazarus Anthony, 21 told police Pastor Ita was the driver of the vehicle they used to commit the murder.

“I am a cultist and belong to black axe. Abu and his squad killed Kelvin at Upper Sokponba. The next day, I led my squad to kill Abu at his workshop. I used locally made gun. It was Edoba that asked us to do the killing, This is the first person I have killed. After killing him, I became confused and did not know what came over me.  “I am pleading for Federal Government to forgive me. I want to renounce my cult membership. We are many that are cultist in that street.” – Lazarus told police