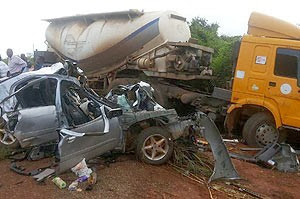 Just six days to Christmas, 4 friends have died in a fatal car accident that happened in the early hours of yesterday in Ikotun, Lagos, Nigeria.

The fatal car crash happened around 2am at the popular Arida Bus Stop after the driver lost control and hit an electricity pole.

4 out of the 5 occupants of the car died while the survivor is presently clinging to life at an undisclosed hospital.

Police sources said the identities of the victims were not yet known. The registration number of the affected Toyota Tercel car was given as BT 597LND.

The victims bodies have been deposited at the Igando General Hospital mortuary.

The damaged car has been taken to Ikotun Police station.

Police sources have made contact with the deceased relations.