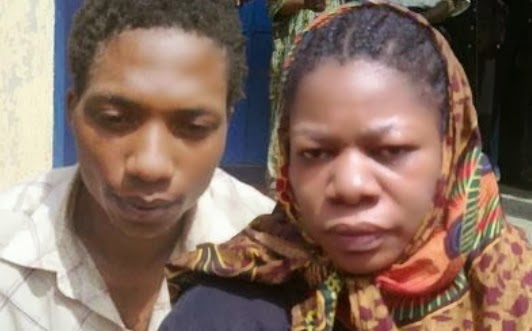 Police officials in Edo state arrested 19 suspected criminals, including a Pastor and wife of one Mr Isonguyo Victor, a Deputy Manager at the Nigeria Petroleum Development (NPDC) Company, who was allegedly murdered last Friday by his wife and her Pastor lover.

Among the 19 suspects paraded were kidnappers, child defilers and robbers.

Commissioner of Police,CP Foluso Adebanjo who narrated how Mrs Enebong Victor Isonguyo planned the murder of her husband with her Pastor lover, Prince Udoka Nkanchukwu, said they both confessed to be lovers and plotted the death of the NPDC staff and father of three.

According to him, “what happened was that the Pastor asked the deceased to meet him somewhere along Sapele road.

“When the deceased got there, the Pastor stabbed him twice and then burnt the car. The woman gave the husband’s new car to the Pastor and we found the car with the Pastor.
“After killing the man in his vehicle, he set the car ablaze. The Pastor changed the number plate of the new car and put a fake one after he murdered the man.”

Mrs Isonguyo who denied having extra marital affairs with the Pastor, said: “When I did not see my husband I ran to the Pastor because we have known for a very long time. I took my husband’s new car to him to sow as a seed in the church so that my husband will be found. I told him to take it to the church but I didn’t know that he went and changed the number plates.