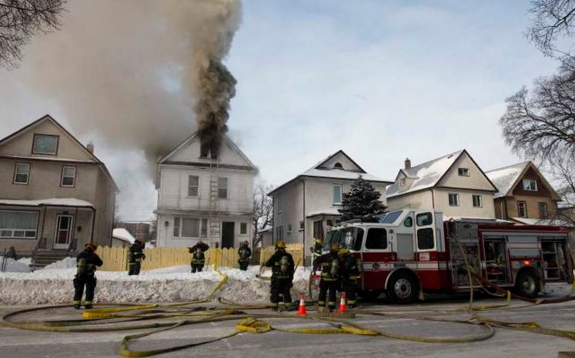 4 members of a Nigerian-American family have been reported dead in a fire that engulfed their two-storey brick home in Chillum, Maryland, United States on Tuesday night.

Reports say Samson Omogbo, 63; his wife, Caroline, 55; and their daughter’s two-year-old twins The mother of the twins, Elizabeth Omije, escaped death by jumping out of a two-storey window.

Two other sisters escaped before the fire completely destroyed the home of the Nigerian immigrant home into which they moved last year.

The basketball club of Elizabeth’s brother, Emmanuel Omogbo, expressed deep pain at the tragedy that hit the senior forward of the Colorado State basketball programme.

“This is absolutely heartbreaking for Emmanuel, his family and for all of us that know him. There are no words to describe how it felt to hear this terrible news earlier today. They were a beautiful family that I enjoyed getting to know. The entire Colorado State men’s basketball team, athletic program and university will be there to support and help Emmanuel in any way we can through this incredibly tough time in his life.”

Omogbo, in his first season at CSU after transferring from South Plains College in Texas, plans to play in Wednesday’s game at Air Force.

“As tragic as it gets,” senior guard Joe De Ciman said,

“I heard the news this morning, and you’re just kind of in shock. You’ve just got to send prayers to him. He’s a really tough guy. That’s what you get when you come to this program. We’re family. We’re all playing for him and his family the rest of this season.”

What Is Patoranking’s Business At The State House?
Police Questions Muslim Boy Who Says He Lives In A Terrorist House In England