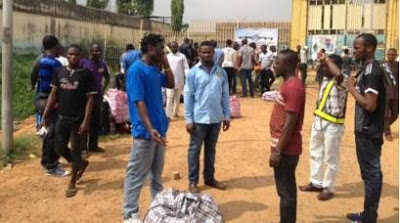 40 Nigerian citizens deported from the UK and Australia have arrived home.

The deportees (33 men & 7 women) landed at the Hajj Camp area of MMIA around 7:25am in two chartered aircraft with registration # ZTA-4741.

Other Africans were also deported to their host countries for overstaying their visas and other immigration offences.

Some of the deportees reportedly fought immigration officials and forced their way out of the airport.