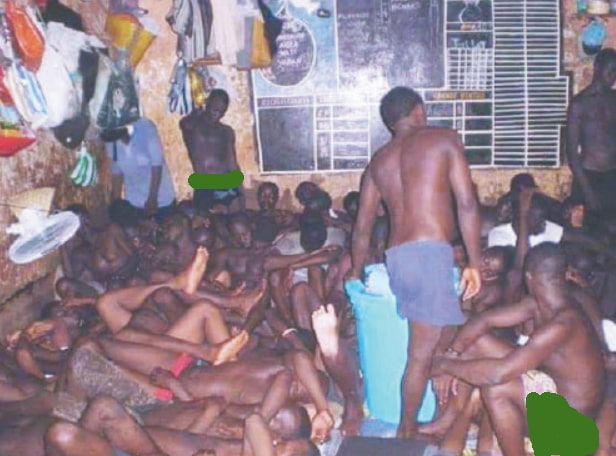 Most of them had left home in search of greener pastures. Some were just on a genuine business trip while some others may have just strayed out. But all of them ended up in the Togolese gulag, most of them for no just cause.

In the Togolese prison, over 200 Nigerians have been subjected to the worst inhuman treatment with the authorities who clamped them into the detention camp making no efforts to prosecute them in a court of competent jurisdiction. Most of them have stayed up to one decade without trial in the Togo prison.

Therefore, these Nigerians who are languishing in prison in Lome, the capital of Republic of Togo, have appealed to the Federal Government to intervene over the deplorable condition in which they have been held by the prison authorities in the country.

In an SOS message to President Muhammadu Buhari, the Nigerians lamented over the dehumanizing condition in which they have been kept in captivity without trial. They also protested over their alleged torture by the prison security officials.

The inmates, who cut across the three major ethnic tribes in Nigeria – Hausa, Yoruba and Igbo – while lamenting in a video and audio recording released recently and obtained by Sunday Sun, pleaded with the Federal Government and other well-meaning Nigerians to come to their aid as most of them are dying from malaria, headaches, tuberculosis and other ailments.

They also complained that they are kept in detention for minor and trivial offences like two-fighting, especially with Togolese nationals and other minor negligible offences. Most of them said that they have been in prison for five to 10 years without trial.

Taking up their case, the President of Global Society for Anti-Corruption Nigeria, Mr. Franklin Ezeona, has appealed to the Federal Government to intervene and come to the aid of the Nigerians held in the Lome, Republic of Togo prison without trial.

In a letter entitled:

He lamented that it was pertinent to inform the president of the plight of Nigerians who are being held in civil and criminal offences without proper investigation or trial in Togo.

In the letter dated Friday, March 15, 2019, to President Muhammad Buhari and copied to the Attorney General, Minister of Foreign Affairs and the Ambassador of Nigeria to Togo, Ezeona revealed that they have video recordings and pictures of over 200 Nigerians jam-packed in a room and forced to sleep on the bare floor under dehumanizing conditions.

“The actions of the Togolese government are against the provision of the United Nations Universal Declarations of Human Rights internationally.

In the recordings, obtained by Sunday Sun, one of the inmates, Ben Okolie, in an emotion-laden voice disclosed that Nigerians in Lome prison are object of mockery, hatred and wickedness.

“They dumped us here and asked us that if we have a serious government, we should call them to come and help us and this is the reasons many people have died,” he cried out.

He noted that they are not obliged medical attentions neither is food given to them.

“If you watch the video, you will see where we are cooking our food with local dirty pots in a dirty environment. This has resulted to many deaths of Nigerians in this prison custody. We cannot give the exact account of what is happening to us and the prisons officials in Togo have not been able to give any account to the government of Nigeria, they close it up, not wanting the Nigerian government to know,” he said.

He also said that the authorities in Togo fabricate stories about the inmates, leveling false offences they did not commit on them.

“Many of us are crossing from Ghana to Nigeria. They take us to police station and from there, we get to the prison, keeping us here for many years without, trial, judgment or calling anybody to come and help us.

“The maltreatment here is in the extreme. There is no fair judgment. They take sides with their nationals and flog Nigerians mercilessly when they are caught fighting with a Togolese. We are about 400 Nigerians in this prison and we urge President Muhammadu Buhari to come to our rescue as he assumed his second term tenure in office,” he pleaded.

Another inmate, whose voice was recorded in the Yoruba Language disclosed that he is a taxi driver, plying the Ghana-Nigeria route.

In one of his trips, he said that they found Indian hemp in his taxi, saying that “the hemp is not mine, I don’t sell or take hemp, and I don’t know how much it costs. They took me to the police station first before bringing me to this prison since 2014 without trial or judgment while their nationals are given judgment within three months. I have not seen my wife and children these past five years.”

“If you have headache, they ask for money before giving you ordinary headache medicine. We have Togolese in Nigeria and they are going about their businesses, nobody is policing them, but the mere fact that you are a Nigerian, all eyes are on you in Togo. We are almost 50 in number sleeping in a kitchen space. You pay the prison officials before you bathe”.