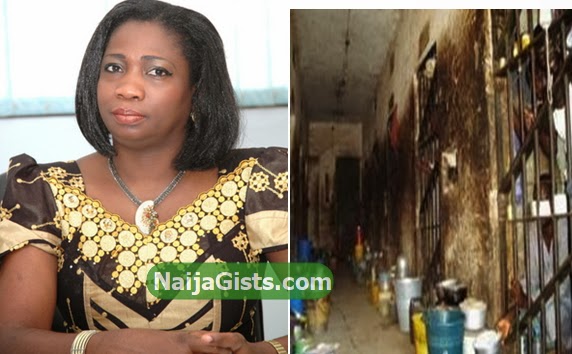 Mrs Abike Dabiri Erewa, the Chairman of Committee on Diaspora affair has described the increasing numbers of Nigerians in foreign prisons as “ridiculously embarrassing”.

She made this known after visiting 2 prisons in South Africa where more than 419 Nigerians are being detained for various offences.

The committee during an interaction with some inmates, were told that although some of them have completed their prison terms,they were being kept in Jail.

The inmates complained of extreme discrimination by the prison authorities in South Africa saying that a Nigerians, they get very bad deal.

Sometimes according to the inmates, the authorities tore into pieces their Nigerian passports among several other allegations and refused to grant them bail, while others from other countries that committed similar bailable offences were granted bail.

Dabiri- Erewa advised the inmates to stay away from crime as obviously it does not augur well, no matter what.

While on a visit to the Nigerian High commissioner to South Africa, Ambassador Sonni Samuel Yusuf, the committee commended the embassy for their various interventions and intimated them of the various allegations not only by Nigerians in prison but Nigerians generally in South Africa of discrimination in several areas.

The Nigerian Ambassador assured the committee, that the embassy will continue to make the welfare of Nigerians in South Africa their priorities.

In the words of the Ambassador, “nobody has the right to seize anyone’s passport not to talk of tearing them into pieces”.

He said issues like that are not peculiar to Nigerians alone but blacks generally in South Africa, adding that African ambassadors in South Africa are deliberating on the issue.

He said the embassy will not relent in its efforts to protect the right and dignity of Nigerians.

He also commended the large numbers of Nigerians excelling in South Africa in their various areas of endeavours, adding that the Embassy would continue to ensure that “one bad apple does not spoil the whole bunch”