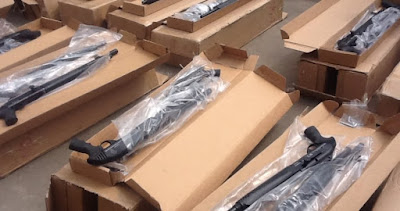 The NCS today seized another 470 rifles at the Tin Can Island Port in Lagos.

The Comptroller –General of Customs, Col. Hameed Ali, who disclosed this to journalists, said the Federal Government would engage the Turkish government over spate of illegal importation of dangerous weapons from the Middle East nation to Nigeria.

He said a meeting between the leadership of Customs and the Turkish Ambassador in Nigeria, has been fixed for Friday as part of efforts to fish out those directly or indirectly connected with the dangerous importation.

He said the new container belongs to the same importer of the 1,100 rifles seized few days ago at the port.
“The Customs’ leadership was sad because despite their previous efforts, our officers at the Tin-Island port had intercepted another 470 rifles shipped into the country from Turkey.

“The importer of this deadly cargo was Great James Oil and Gas Limited, while the vessel MV Arkas Africa owned by Hull Blyth was used in the illegal shipment of the guns into the country,” the Customs Comptroller General said.

According to Ali, the importer used the elbow plumbing plastic he declared in his Bill of Lading as a decoy to deceive the Service before the container No. CMAU189817/8 was subjected to 100 per cent examination by officers.

He said Customs officers discovered that the guns were concealed in a 20-foot container.