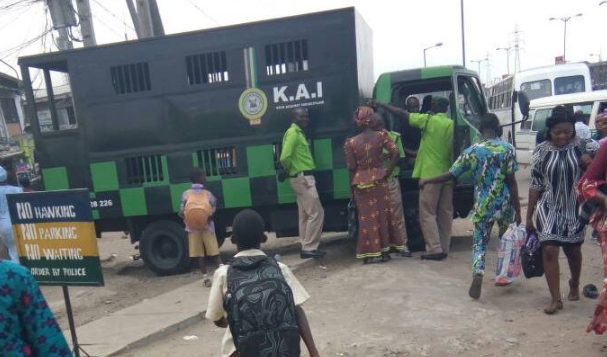 Confusion was the order of the day yesterday in Egbeda Lagos when angry traders attacked officials of the Kick Against Indiscipline (KAI) for allegedly demanding N50 bribe from traders.

During the attack which occurred at the Egbeda bus stop, the traders vandalized the vehicle (Black Maria) brought by the officials. They also released all the traders arrested by the KAI officials kept in the vehicle.

PMNEWS gathered that the KAI officials were fond of harassing and extorting money from the traders under various guises.

One of the traders who identified himself as Bolaji Ayorinde told PMNEWS correspondent that he was selling his wares when KAI officials approached him for the daily N50 collected from traders.

“When the KAI official approached me, I gave him my N50 but another trader refused to pay the money because he has not sold anything.

”Trouble started when the KAI officials arrested him and carried his wares, other traders got angry and attacked the officials.

”Everybody was fed up with the illegal collection of N50 from traders who are trying to make ends meet, ” he stated.

Many food vendors in the area who spoke with PMNEWS on the issue accused the KAI officials of extorting money from them everyday and if they refused, their good are taken away.

”KAI officials will come to your shop and demand for rice and beans and they will not pay. In some cases, they come and demand for uncooked rice, beans, garri, corn and others from us. If you refused to give them, they will arrest you and keep you in their Black Maria for long hours before taking you to their office in Alausa where they will extort money from you. The harassment is just too much. That was why we joined the mob to attacked them,” a food vendor who spoke on condition of anonymity stated.

”I want the government to call these people to order. They are very wicked. They don’t care and they are thieves. The government should look into their activities and remove the bad eggs among them,” he added.

Another trader, who gave her name as Ufuoma, appealed to the government to save them from the corrupt KAI officials.

”Every Thursday environmental sanitation day is used to extort money from traders. You will see KAI officials moving from shop to shop demanding for N50. If you don’t pay them, they will arrest you and take you to their court in Alausa where they will fine you a heavy amount and if you cannot pay, they will just dump you at Kirikiri prison in Apapa.

”Government needs to check their activities. Dem own too much, we are suffering,” she pleaded.

Another trader revealed that the KAI officials were trailed by traders to Egbeda from Iyana Ipaja.

”We followed them from Iyana Ipaja where they arrested many traders and seized their wares for not paying them bribe money. It was at Egbeda that we got support from angry traders.

”KAI officials will come to us and ask us to contribute N8,000 from our point for their Oga. For God’s sake, what are we selling? If you refuse to give them money, they will carry away your goods. This is unfair,” he said.

In her own account, a witness who identified herself as Kemi Towobola told our reporter that the traders got angry and attacked the KAI officials because they nearly caused the death of a hawker they were chasing.

”If not that the people shouted, a trailer driver would have crushed the boy to death. This was what infuriated the traders and they attacked the KAI men,” she said.