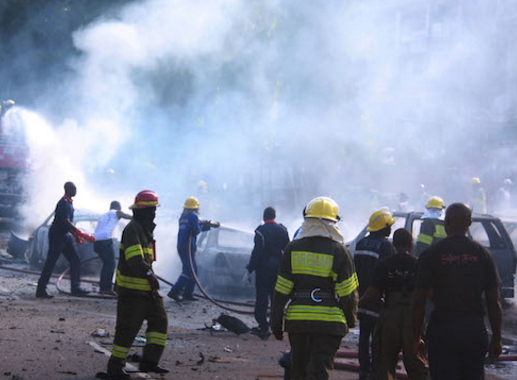 Lagos State Fire Service cried out yesterday over the frequent attacks on its men in line of duty, warning those involved to desist or face the law.

We learnt that more than five firemen have been attacked in various parts of the state.

The service director, Rasak Fadipe, said the officers were attacked at Idewu Street, Olodi-Apapa, Ajegunle and Odunsi Street in Surulere.

He described the officers as dedicated and hardworking, adding that their motive was to save lives and property.

According to him, the gallant officers responded to distress calls and were about to carry out their statutory duties when the hoodlums who wanted to loot saw them as obstacle and started attacking, stabbing and chasing them from the fire scene.

Fadipe explained that a senior officer was stabbed in the ear with a broken bottle; another was wounded in the head; others were manhandled.

“In order to prevent confrontation and breakdown of law and order, the officials retreated and ran for their lives. The mayhem was reported at Tolu and Itire Police stations and it led to the damage of a fire truck,” he said.

He hailed the Itire Divisional Police Officer (DPO) for intervening and rescuing the officers from further assault.

The fire boss appealed to the public to desist from damaging government facilities as tax payers money were expended on providing the amenities. The consequences of unwarranted but coordinated attacks on fire trucks, he said, were an indirect denial of dividend of democracy to others as the damaged truck cannot serve the need of Lagosians.