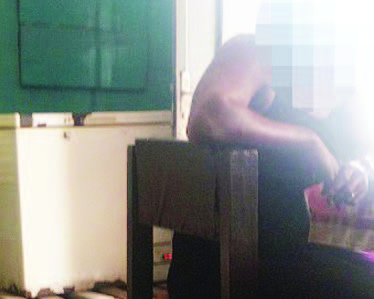 January 29, 2016 – Imo State University & Friend Arrested For Raping Girl They Met On Whatsapp At A Hotel In Lagos

Lagos State Police Command officials have arrested two undergraduates for allegedly raping a job-seeker, identified only as Nike, and robbing her of valuables in the Igando area of the state.

We learnt that the suspects, identified as Valentine and Kusimo, allegedly took turns to rape their victim after luring her into a hotel.

Valentine, an indigene of Imo State, was said to be seeing off the 27-year-old with the hope that she would not raise the alarm when Nike suddenly called for help.

The suspects were subsequently arrested and taken to the Igando Police Division.

The incident happened on Thursday, January 14, 2016, on Idowu Ibiyemi Street, in the Igando area of Lagos State.

A police source told our correspondent that Valentine and Nike had met on a dating site.

He said, “Valentine is a 400-level Civil Engineering student of a university in Imo State. He chatted up the lady on the dating site and from there, their conversation shifted to Whatsapp, a mobile messaging application.

“The suspect told his friend, Kusimo, about the girl and they decided to trick her. Kusimo, a student of a polytechnic in Ogun State, would sometimes take Valentine’s phone and be chatting with Nike, without the girl knowing that it was Kusimo.

“Having done that for some days, they decided to invite her to Lagos.”

It was gathered that Nike, an indigene of Osun State, travelled down from Ibadan, the Oyo State capital, where she was based, to the Igando area.

Our correspondent learnt that the victim and Valentine scheduled to meet at his house.

We gathered that instead of taking her to his apartment, the suspect took her to a popular hotel in the area.

The source said, “The girl did not know she was taken to a hotel because he took her through the back into the room.

“The second suspect, had, however, hid inside the toilet. As the lady entered the room, Valentine shut the door and Kusimo jumped out from his hideout with a bottle. He smashed the bottle on the ground and he told the girl to cooperate or they would kill her.

“While Valentine had two rounds, the second suspect had three rounds of sex with her. After they had raped her, they robbed her of her BlackBerry and N15, 000.

“In order to prevent her from exposing them, they took snapshots of her nakedness and threatened that if she told anyone about her ordeal, they would put the pictures on the Internet.”

We gathered that after committing the act, Valentine decided to see Nike off.

The victim was, however, said to have raised the alarm, drawing the attention of passersby.

She was said to have narrated what happened to people, which led to the arrest of both suspects.

Photo: Armed Robbers Kill Pregnant Woman In Abuja, Shoot Another On The Stomach
5 Lagos Fire Fighters Stabbed By Area Boys While Trying To Put Out Fire In Ajegunle & Surulere