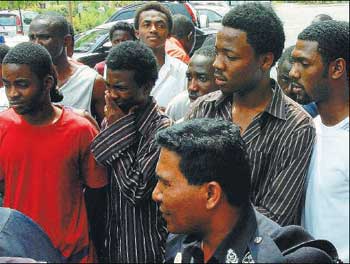 5 Naija students currently studying Information Technology at a private college in Kuala Lumpur have been arrested for internet fraud.

The suspects were picked up from different locations last Tuesday the 30th of June for allegedly duping victims to the tune of N125.2million (RM 2.4 million).

Their accomplices, Malaysian women aged 40 and 55 where also arrested for helping the criminals.

The owner of an ice production factory who was duped by the syndicate reported the case to the police.