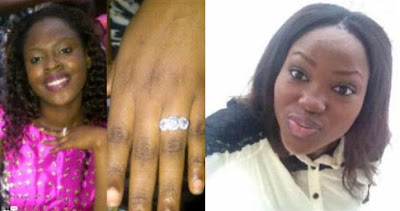 While coming from the birthday party of one of their colleagues mother, 5 students of the University of Lagos (UNILAG) got involved in a fatal car accident along Ikeja Int’l airport road in Lagos on Monday.

According to eyewitnesses report, the car crash killed 3 out of the 5 unilag students instantly while 2 of them are in critical condition at the hospital.

We learnt one of the victim of this fatal car crash invited few of her friends to the birthday party of her boyfriend’s mother.

The students left Emerald hostel in the early hours of July 1st, 2013 for the journey of no return.

The lady that invited her friends got a surprise proposal from her boyfriend, the son of the birthday celebrant.

The lady pictured on the left above identified as Adelowotan Oluwafunmilayo, a 200Level Quantity surveying student was the first victim of the accident.

She died as a result of head injury after she was ejected from the car they’re driving.

Her best friend too who accompanied her to the event also died when she got crushed.

Some students on campus are insinuating that the mother of the boy who invited them allegedly used them for ritual.

One of the concerned students who opted out of the invitation said how come the boy didn’t propose to the lady in a different way… why not on his birthday or the girl’s birthday..

Why did he propose to her on his mother’s birthday.

The concerned students claim the ring on the left finger of the Funmilayo is a ring of death that caused the fatal collision.

Look below for the pictures from the accident scene.

May their souls rest in perfect peace.