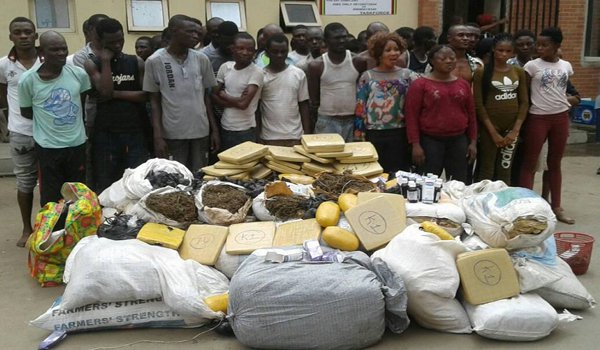 The mid-night operation was led by Soji Akinbayo, an Assistant Commissioner of Police (ACP), the task force Chairman, Olayinka Egbeyemi, a Superintendent of Police (SP) and all Divisional Police Officers under Area ‘D’ command Mushin.

All the suspects were charged on Friday before Magistrate Lateef Owolabi of the Lagos State Mobile Court on three-count charge of unlawful possession of weed suspected to be indian hemp, trading in indian hemp and conduct likely to cause breach of peace and disorderly manner.

The case was adjourned till November 15.

Egbeyemi, in a statement said those arrested during the raid include 44 men and six women.

According to him, substances suspected to be indian hemp with packs of other illicit drugs such as ‘Novalyn with Codeine Cough Syrub’ and ‘Tuxil-C cough and cold with Codeine’ were recovered during the raid.

The Tak force said one of the suspects, Sunday Adesoye a.k.a ‘Malboro’ confessed that ‘Akala’ serves as a ‘Central Market’ for indian hemp and illicit drugs to all miscreants across the State.

Malboro was quoted to have sold an average of N500,000 worth of Indian hemp with other illicit drugs daily to his customers from Obalende, Oshodi, Pen-cinema, Apapa, Lagos Island, Fadeyi amongst others.

“A suspect, Mrs Basirat Jimoh a.k.a Iya Suzzy, who hails from Ibadan, Oyo State capital confessed to have been trading in indian hemp and other illicit drugs at Akala area for over 17 years. She however claimed to be only buying/selling india hemp and not into criminal activities,” task force said.