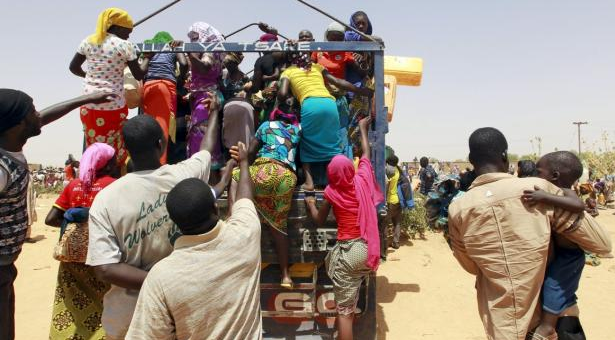 Thousands of Nigerians told to leave neighbouring Niger in the past week due to threats from Boko Haram militants have died en route from lack of food and water, evacuees told Reuters.

Niger has evacuated Nigerians living around Lake Chad, military and aid officials told Reuters on Tuesday, as the armies of four west African nations battle to quash the Islamist militants.

“I counted over 50 people that died on our way out of (the town of) Lalewa when the Niger soldiers were chasing us as if we are animals,” said 45-year old Ibrahim, one of the group who was originally from Nigeria’s Kebbi state.

The United Nations humanitarian coordinator OCHA said that 25,000 people had arrived in the towns of N’Guigmi and Bosso in southeastern Niger after fleeing their island homes on Lake Chad. OCHA said most of these families needed shelter, food and water.

The governor of Niger’s Diffa region initially told people to leave by Monday for security reasons after an attack by Nigeria-based Boko Haram, which killed 74 people. The deadline has been extended to Thursday evening.

A six-year insurgency by Boko Haram in Nigeria has seen thousands killed and displaced about 1.5 million people in the country.

Nigerians who fled to the Nigerian border said they had been called out of their homes, lined up and brutally hurried out with no supplies.

Musa Samaila, a fisherman from Lalewa, said he had walked for three days and his son had died of dehydration in his arms.

“I can’t believe what happened that the government of Niger just woke up and decided to chase us out of a place where we have been doing business for years,” Samaila said.

Niger’s prime minister said the government was supplying food and healthcare to those who arrived at the camps in N’Guigmi and Bosso while thousands of other Nigerians had been repatriated.

One of those who fled, Hanatu Saidu, told Reuters that her husband had been shot by a Nigerien soldier in the leg when troops came to their town and told them to leave.

There was no systematic process for repatriating the Nigerians, evacuees said.

Some were picked up in trucks at the border town of Mainé-Soroa and taken to two camps in Geidam in Nigeria’s Yobe state, set up in a primary school and a small stadium. Others walked the whole way or got rides for part of the way.

“The need arose because the Niger government wanted to conduct military operations in those areas,” Air Commodore Charles Otedegba, director of Search and Rescue at NEMA said.

“They offered to relocate the Nigerian citizens to some of the IDPs (internally displaced people) camps within Niger but the people refused and chose to come back home.”