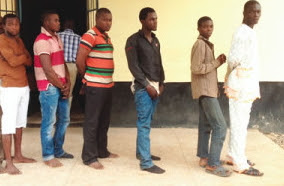 6 men have appeared at an Ado-Ekiti Chief Magistrates’ Court, Ekiti State, for allegedly involving in cultism.

Police prosecutor Caleb Leranmo told the court that the defendants committed the offence, about 10 am., at Omuo-Ekiti in Omuo Local Government.

Leranmo said the defendants paraded themselves as members of “Ashanti Secret Society”, which terrorise the community.

He said the offence contravened Section 4 (1) of the Secret Cult (Abolition and Prohibition) Laws of Ekiti State 2006.

Their counsel, Mr. Timilehin Omotosho, prayed the court to grant them bail, promising that they will not jump bail.

The Chief Magistrate, Aderopo Adegboye, granted bail to the defendants at N200,000 and two sureties.

He adjourned the case till October 27 for further hearing.

Continue Reading
You may also like...
Related Topics:Ashanti, secret, society