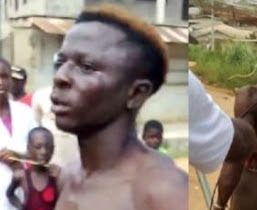 A boy identified as Muideen Nasiru has been sentenced to 39 months imprisonment by an Iyaganku Magistrates’ Court in Ibadan, Oyo State for stealing aluminium frames and other items, worth N500,000, from a church.

The Magistrate, Mrs O.K. Omotosho, sentenced Nasiru, 18, after he pleaded guilty to a three-count charge of conspiracy, break-in and stealing.

Omotosho said the convict should spend his prison term at Agodi Prisons, Ibadan.

“The young boy is a thief, no doubt; he has a godfather, who buys stolen items from him.

“The society will be better for it if he is incarcerated; he may learn a thing or two in prison.

Omotosho held that the sentence should run concurrently.

Police prosecutor Olalekan Adegbite told the court that the accused committed the offences with others at large at Christ’s Ambassador Church, Inalende, Ibadan.