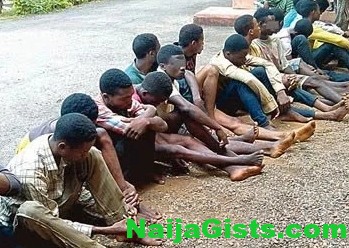 Imo state Police command have arrested a girl identified as 14-year-old Iheoma Chidinma and 5 other suspected members of the dreaded Deegbam cult while taking the fresh head of a man, Ofurum Oguegbu to a shrine in Assa area of Ohaji/Egbema LGA of Imo state for initiation ceremony.

The cultists were arrested on Monday the 26th of September 2017 in connection with the murder of their victim.

Imo state police spokesman, Andrew Enwerem said the suspects abducted their victim who ran into them while they were doing initiation.

They allegedly took him into the bush and killed him.