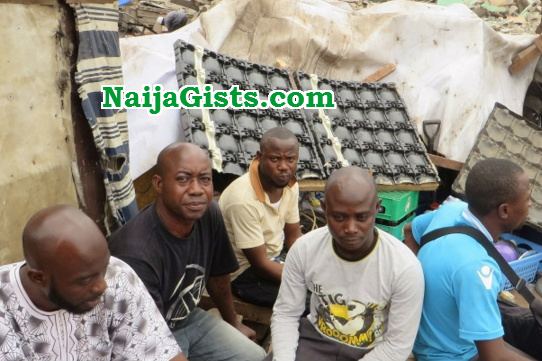 The police at Shasha division have arrested six suspects, four women and two men for allegedly constituting a nuisance by living in an uncompleted building in Lagos State, western Nigeria.

The male suspects are Emmanuel Raphael, 41, and Olusegun Oshineye, 23.
The building in question is located at 117, Akowonjo road, Vulcanizer bus stop, Egbeda, Lagos.

The police alleged that the suspects used the place to engage in criminal activities such as commercial sex, smoking of drugs and other vices.

Following the information by the residents on their activities, the police stormed the uncompleted building at night and arrested the suspects, while others escaped.

Some of the suspects who spoke to our reporter said they were not criminals as police alleged, but were sleeping in the place because they were unable to afford house rent.

Emmanuel Raphael said he was living there with some members of his family after their landlord sacked them because they could not pay their rent.
He said they were using the place temporarily till when they will raise money to rent an apartment.

He said it was not a good thing to live in an uncompleted building, saying he was forced to live there because of his condition.

Another suspect, Tawa Balogun, said she resided in the uncompleted building because she was not able to get accommodation. She denied that they were using the place for criminal activities.

She said those who reside there already had problem and there was no point compounding their already complicated problem by engaging in crimes.

She said they have been pleading with the police and the owner of the building, who insisted they will charge them to court.

Luck smiled on the suspects when they were brought to Ejigbo Magistrates’ court to be arraigned and the presiding Magistrate, Mrs. J.O.E. Adeyemi struck out the matter and released them.