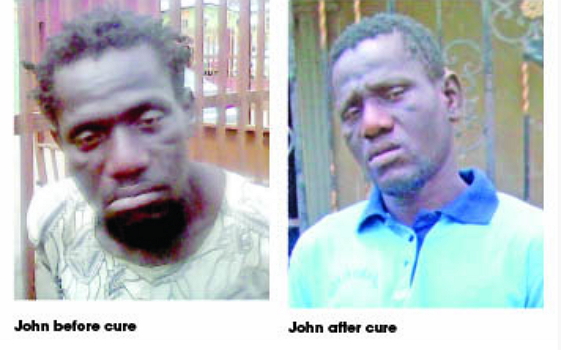 It was the day he was miraculously healed of his insanity after he had been wandering the streets for 14 solid years.

Even now, almost five months after, the story still sounds strange to him. But those that knew him during his days as a madman insist that there is no sign that he had ever suffered from mental challenge.

When the reporter visited him at his pastor’s residence, it was hard to know that he had ever experienced any form of insanity. But he couldn’t narrate how he became normal again after many years of purposelessly roaming the streets of Lagos.

He told the reporter: “My parents hail from Delta State, but I was born in Lagos. I can’t recall what happened to me during those years.

The only thing I could recall vividly was the crowd saying amen to the prayers I heard as water was poured on me that day. I saw a crowd gathered round me shouting, ‘praise the Lord’ and I was confused. But I knew through the pictures and documents that I was mad before. But now, I thank God that I am better,” he said.

According to his elder sister, Christiana Kakaviya, John’s issue started in the year 2001 when he completed his secondary education.

The once bright young man started displaying signs of madness after his West African School Certificate examinations which he passed with distinction.

“John was a brilliant student then. I remembered when we were in secondary school; his results were the best in the family. We all grew up in Lagos but lost our father along the line. The signs started showing first in his elder brother Emmanuel before it manifested fully in John.

“I remember a particular time when he was too violent to control: I had to call the neighbours to tame him. This happened when we were living at Kosofe. Honestly, it was hell for me taking care of him then. It got to a stage that the people living around us told me to remove him from the area. I could not do it because I could not afford his hospital fees.

“John stayed with me and one day, he left the house and for two years, he did not return. One day, my son went to Ketu where he saw his uncle on the street running, wearing a pair of torn boxers, talking to himself and smoking. He told me that his condition was too extreme. I broke down in tears because I knew that this was not normal,” she said.

Showing our correspondent the medical card of John, she narrated with a pitiable face how she suffered in taking care of her brother.

“I saved some money and took John for medical check-up at Yaba where he was confirmed to be mentally unstable. His treatment continued for some months and when I could no longer foot his bills, I brought him back home. But he left again and we lost touch until I heard of the miracle.

“Honestly, it was not easy for me seeing my brother mentally unstable.
When he went missing for two years, I did all in my power to locate him for about one year. It was after the second year that someone told me that they saw him at one garbage point.

“Even though the traffic held me that day, I went there and saw with my own eyes, my brother sleeping half naked on the refuse dump. I could not stand it and so I told people to help me get him. People around refused because they said he was known to be violent. My younger sister also visited him but could do nothing.

“Whenever he was mentally unstable, John possessed a very harsh character, but he would play sometimes. He worked as a security guard for a bank at Satellite Town before, but his appointment was terminated due to his mental state,” she said.

In an interview with our correspondent, Pastor Enahoro, who conducted the deliverance session where John was brought back to normal, said that he had noticed the man for weeks and was moved with compassion to pray for him.

“By the grace of God, before that first of July when the miracle occurred, I have been seeing him at that Ketu area and saw the way he was violent, dirty and the way he spoke to himself. I knew within me that it was the work of the devil. So I tried to minister to him but he attacked me. I had to run for my life but my conscience was telling me to go back and minister to him.

“After some weeks, I met him at Ketu again, this time under a bridge. He was smoking a packet of cigarettes, looking tattered and talking to himself, demonstrating on the air as he smoked. It was such a disgusting sight. After series of prayer and fasting, I went one evening again but I couldn’t find him there. I wanted to give up but I couldn’t. His case kept disturbing me.

“The day the spirit moved me, I went to him, and he was only in his boxer shorts, looking dirty at a round-about in Ketu. I bought him food and clothes. After he had eaten, I asked him his name and he shouted John and told me to leave him alone unless he would destroy me. People around gathered and were watching us.

“He tried to attack me and that was when I commanded the spirit to leave him. He struggled because I noticed some fetish bangles on his hands which contained the demons disturbing him. So I managed to break it from his hands through prayers and he fell and got himself.

The reporter gathered from an eyewitness who didn’t want his name mentioned that John was a popular but violent lunatic who roamed the Ketu axis prior to his healing.

“I really don’t know his name but I was there when the pastor prayed for him. I even recorded the video on my phone. For a long time now, he has been here smoking and eating from the refuse. Honestly, that was my first time to see such a miracle,” he said.