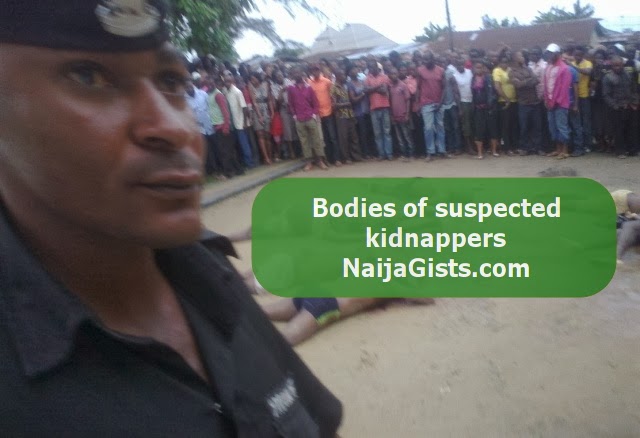 It was end of the road for suspected six-man kidnap gang when operatives of the Special Anti Robbery Squad (SARS) ended their reign of terror in Azia, Ihiala Local Government Area of Anambra State.
The kidnappers had in the early hours of yesterday kidnapped one Sunday Okoye, a member of the community.

In the process, the alleged kidnappers were gunned down, while their victim, who was in the trunk of a car, was rescued by operatives of SARS with minor bullet injuries.
The SARS operatives, led by its commander in the state, James Nwafor, a chief superintendent of police (CSP), engaged the kidnappers in a fierce gun duel when they made attempt to whisk their victim to Asaba, Delta State.

The kidnap suspects, led by a notorious gang leader, popularly known as Nonso Mgbe, were alleged to be the killers of the Officer Commanding SARS at the Central Police Station, Mr. Emma Ochuobi, in May 2013 in the commercial city of Onitsha and since then had been on the run.

Items recovered from the suspects were three AK47 rifles, 36 magazines, 413 rounds of ammunition and a box of charms with various sizes.
Speaking to newsmen at the SARS headquarters in Awkuzu, Anambra State Police Public Relations Officer (PPRO), Emeka Chukwuemeka said the battle would continue till December, adding that the operation was a mop-up action initiated by the command to get rid of criminals in Anambra State.

“Yesterday, between 8 and 9pm, a gang of six persons kidnapped one Sunday Innocent Okoye in his Honda Acura Legend car in Awka and took him away. When the information got to the police command, our men were deployed to cordon off all major roads within and outside Awka, and the manhunt began.
“At about 2.20am, Sunday morning, we saw the gang when they were making effort to move to one of the neighbouring states and on citing police vehicles, they open fire and the police retaliated and gunned four of them down.

“The other two, who sustained injuries later died and this is a warning to such hoodlums in Anambra that the place is no longer safe for them especially from now till the Yuletide period.
“We will continue this operation till December and we want to make sure that our brothers and sisters who will be home for Christmas will be at peace and enjoy their stay. Anambra is no longer a hide out for criminals,” Chukwuemeka said.

The Chairman of Campaign for Democracy (CD), Dede Uzor Uzor yesterday commended the Anambra State Police Command for the wonderful job they are doing in the state especially the SARS commander, CSP James Nwafor.

Uzor said they still have some work to do in making sure that three other kidnapped victims since December 5, 2012 , Vitus Ezekwueme (aka VTS), Ifeanyi Okoye and Ifezue were rescued.