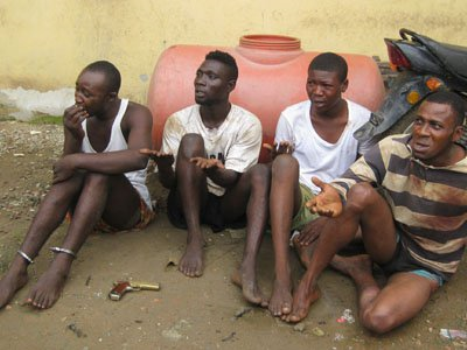 The suspects were arrested by police operatives after a tip-off from the community.
The police then placed a fierce surveillance on the suspects throughout the night before closing in on them on Friday, 6 November.

Those arrested are; Temituru Oluwafemi, Ibrahim Hakeem, Bablola Olufujabi, Ajadi Adesoji, Taye Ogede and Bakare Sakiru.
Four out of the suspected armed robbers have been identified by victims of their various operations across the local government area and even beyond.

In a statement on Sunday and signed by the State Police Public Relations Officer, PPRO, “the operation vehicle of the suspects, a black Golf 3, with Reg. No LSR 86 CA was recovered along with dangerous weapons and charms.

The Police disclosed that the efforts of the Ogun State Command to solidify security arrangement during ember months period will be implemented tactically and logically.
The statement stated that the State Commissioner of Police,CP Abdulmajid Ali has directed that the suspects be transferred to the Department of Criminal Investigation and Intelligence Eleweran, Abeokuta for proper investigation and prosecution.

The Commissioner of Police has also emphasized on robust intelligence-driven and community-based policing as acceptable and effective tool towards adequate security in Ogun State.