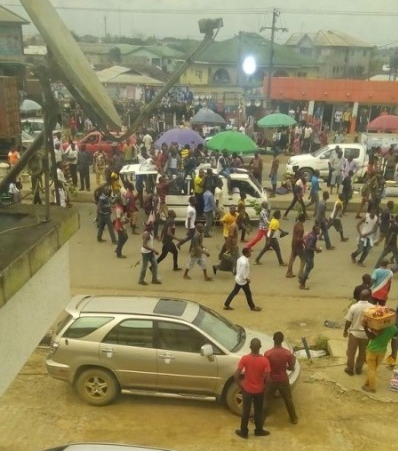 Bus drivers and hoodlums trigger a spontaneous protest in Rumuokoro area of Port Harcourt yesterday over the alleged killing of a bus driver by a soldier from Port Harcourt Barracks of the Nigerian Army.

The unidentified soldier allegedly opened fire on a 20-year-old commercial bus driver identified as Michael Nweye at the busy Rumuokoro round about in Obio Akpor LGA of the state when he refused to obey his instruction.

Before the shooting death, the driver was said to be driving against traffic around 2pm towards the Rumuokoro roundabout, he was stopped by soldiers at the Rumuokoro axis of Bori Camp gate of the Army barracks.

He was ordered to come out of the bus but he allegedly refused. Angered by the behaviour of the driver, one of the soldiers opened fire killing him on the spot.

His body has since been deposited in the mortuary.