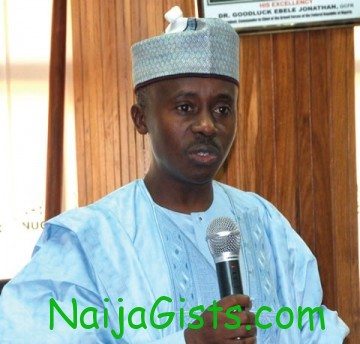 Farouk Lawan, the quintessential member of the House of Representatives and often tagged ‘face of a true legislature,’ or ‘Mr. Integrity’ is currently fighting the battle of his life to redeem his image after he allegedly got his hands soiled by demanding and receiving bribe in the course of his duty as Chairman of the Committee which probed the fuel subsidy scam early this year.

He now has an alleged $600, 000 bribery scandal on his neck and Nigerians are already calling for a thorough investigation of the case and where he is found guilty, he should be used as an example in the fight against corruption.

Prior to this scandal threatening to bring down the legislator, Lawan had exuded integrity and was seen in the country as the super star of the House; one who was above board and ready to sanitise the system not minding whose ox is gored.

Though the embattled lawmaker, who gained prominence during the impeachment of Patricia Etteh as Speaker of the House in the last session of the House, has vehemently denied ever soliciting or receiving bribes, the chairman, Zenon Petroleum & Gas Ltd, Mr. Femi Otedola, has insisted Lawan received the bribe.

Otedola, who also indicted the secretary of the probe Committee, Mr. Boniface Emenalo, said Lawan had collected $620,000 from him as part of the $3 million he allegedly demanded for him to influence the report of the probe in Otedola’s favour.

Lawan did not however know that he was being closely monitored by security officials while he collected the said amount.

According to Otedola, Lawan approached him and demanded that he would like to understand the workings of the downstream sector.

He said this was why he allowed officials of his companies to attend the committee sitting where they told the panel that Zenon had never made claims for subsidy payments from the Federal Government since the company mainly deals in diesel that is not subsidised.

But like one whose mind is made up on enriching himself by all means, Lawan reportedly went ahead and asked Otedola to do ‘the needful,’ so that Zenon would be removed from the list of indicted companies just few days before the report was tabled before the House on 18 April, 2012.

In Otedola’s own words, “when this happened, I was very angry and reminded him that Zenon has never participated in the subsidy scheme and that it would be criminal to rope in the company for something it did not do.

“But Lawan responded, stating that several other marketers were playing ball and had offered the members of the committee large sums of money to ensure that their companies’ names were not published in the report.

“Then a day before the report was to be submitted, Lawan called again, informing me that Zenon’s name had been included in the report.

“I, of course, was very angry and asked him to desist from his course of action, but Lawan insisted that I must pay up as other oil marketers had done before me.”

As threatened, when the report was released, Otedola said Zenon was listed as one of the companies which bought foreign exchange from the Central Bank of Nigeria (CBN) but had not imported petrol, putting the amount against the company at $232,975,385.13 even in the face of serious protests by Otedola.

“I reminded him that the amount ascribed to Zenon was wrong as what the company bought was over $400 million for importation of products through the banks – Zenith, UBA and GTB – and that under Sanusi (CBN governor) there was no way anyone could have bought that quantity of foreign exchange and not imported the products having filled the Form M.

“Sanusi will simply clamp down on anyone who tries to pull that kind of stunt,” he said.

But when Lawan would not budge, the oil magnate said he asked the lawmaker how much was involved and Lawan responded: “$3 million.”

“I screamed at him, demanding to know why he was doing this to me. All he said was other marketers were paying up to keep their names out of the report so I should do likewise.

“As a law-abiding citizen, I decided to involve the security agencies and they advised me to play along, which prompted me to offer to pay part of the money with the promise that I would pay the balance when my company’s name had been removed from the report.”

He said the security officials gave him the serialised notes and that there were audio and video evidence of Lawan collecting the money on 21 April, the Saturday before the plenary.

He said Lawan came in person to his residence and collected $250,000 in cash, as the first instalment, adding that the next Monday night he came and collected another $250,000.

“On Tuesday, at 9am, just before the House commenced seating, Boniface came and collected another $120,000.”

the total amount collected by Lawan and the committee secretary was put at $620,000 in three instalments being part of the $3 million demanded from him.

With the said amount, Lawan removed Zenon’s name from the list during plenary.

“He (Lawan) now asked for the balance of $2.5 million, but when I told him that I had no money now, that the money was in Lagos, he suggested that I should charter a plane to fly the money from Lagos to Abuja.

“…If you have information that an armed robber is coming to raid your home, won’t you notify the police? So, that was the purpose of the sting operation.

“Besides, my integrity is paramount to me. I started selling petroleum products 14 years ago in drums and somebody who has never run a petrol station is trying to blackmail and extort money from me.

“If others (marketers) have paid money, maybe they are guilty. But I did not do anything wrong, so why should they extort money from me? As a law-abiding citizen, I had to involve the security agencies. Indeed, I’m very disappointed because I have worked hard to build my business,” Otedola said.

Denying the allegations, however, Lawan described it as a ploy to undermine the integrity of the committee and its report.

According to him, “I wish to categorically deny that I or any member of the committee demanded and received any bribe from anybody in connection with the fuel subsidy probe and I believe this is evident from the thorough and indepth manner the investigation was carried out and the all encompassing recommendations produced therefrom as approved by the whole House.

“The general Public is hereby reminded that during and after the investigations we have severally raised alarm on pressures on us from different quarters.

“In particular. I wish to refer to the front page publication in the Leadership Weekend newspaper of 28 April 2012 captioned ‘Marketers offered subsidy committee plane-load of dollars’ where we alerted the public that a marketer promised to fly in a jet loaded with US Dollars which he  ‘intended to share to both the House leadership and members of the Adhoc Committee’ to influence the outcome of the report.

“This clarification is necessary in order to clear all the insinuations being bandied about and more importantly to enable the government   concentrate on the implementation of the report.

“The present mudslinging is not unexpected in view of the calibre of people whose actions and inactions were found wanting in the report. I am aware that in their desperation to discredit the report and divert the attention of the public from the real issues of large scale fraud in high places established in our report, a video footage displaying a caricature of my person allegedly having a dealing with a marketer reminiscent of the military era when dignitaries were invited to the Villa to watch a video clip of a phantom coup involving Chief Olusegun Obasanjo is already in circulation.

“I wish to assure all Nigerians that the sanctity of our report remains unassailable and it will be in the best interest of the country if the relevant authorities faithfully and conscientiously implement the resolutions of the House. No amount of redherring and cheap blackmail will affect our resolve to continue to act in the best interest of the country with all the available information at our disposal. No doubt, the last has not been heard.”

Meanwhile, human rights lawyer, Mr. Femi Falana on Monday called on anti-graft agencies to arrest and prosecute Lawan just the way Herman Hembe, another Reps member who allegedly compromised his position as chairman of the House Committee probing the crash of the Nigerian Stock Exchange was docked for collecting bribe from the SEC DG, Arumna Oteh.

Falana, who made the call on a TV programme monitored in Lagos, said corrupt leaders should be isolated and prosecuted.

He said the prosecution of Lawan would not in any way affect the credibility of report of his committee on the oil subsidy scam.

Falana said on Channels TV that since there are reports that there are ample evidence that Lawan allegedly collected the bribe, security agencies should fast track  the investigation in order to get to the root of the scandal.

According to him, “we are running a system premised on primitive accumulation of wealth,” which he said is fuelling corruption, adding that “for the ruling class, it is business as usual.”

Also echoing Falana’s call, Ankio Briggs, a foremost Niger Delta activist, said on the same TV programme that the development was a sad thing and called for a thorough investigation into the matter.

She queried: “Could it be the People’s Democratic Party, PDP’s way to put a question mark on the Farouk Lawan-led committee’s subsidy probe report? We need to be careful while investigating this allegation.

“We do not have credible and responsible government in Nigeria anymore. The people must rise up and make their leaders accountable for their actions.”

Most lawyers spoken to on the issue, said with the development, the report of the committee can no longer enjoy any iota of credibility.

Mr. Ebun Adegboruwa, a human rights lawyer, said corruption is a cankerworm that has eaten deep into the fabric of the country.

He said no effort should be spared in getting to the root of the matter since there is a video recording of the transaction.

He demanded that the video be shown on national television so that all Nigerians  can see, adding that once the evidence is proved, the report cannot enjoy credibility.

Barrister Supo Sewa, another lawyer, said the matter should be thoroughly investigated and anyone found culpable must be prosecuted, calling it a two-way traffic.

Another lawyer, Mr. Paul Ogundele, also said recent happenings in the House of Representatives had confirmed Obasanjo’s claim that the National Assembly is made of crooks.

He called on security agencies to wade into the issue.

Barrister Alex Uzebu said the report was supposed to be tentative since the government said it was sending the report to the EFCC.

He, however said it was shameful and alarming that the chairman of such a committee collected money to undermine the outcome of the report.

He said Lawan should resign immediately to aid thorough investigation into the issue.

Barrister Ade Oyebanji in his reaction said the matter should be thoroughly investigated considering mind-blowing revelations  during the probe.

He said it was not impossible that there were forces at work trying to undermine the report.