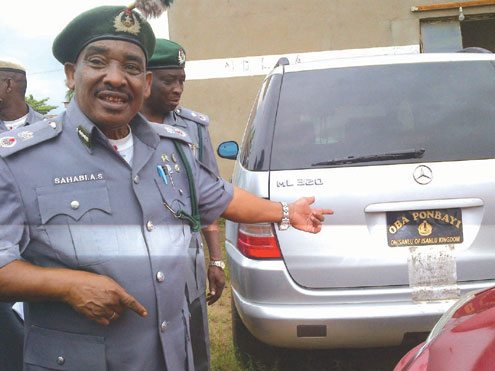 The Customs officials at Seme-Krake border in Lagos, southwest Nigeria, have intercepted a Sport Utility Vehicle, SUV, with a fake royal plate number.

The vehicle was impounded at the Seme-Krake border as one of the suspects was attempting to smuggle it into Nigeria from Benin Republic.

In an attempt to evade customs charges and deceive customs officials that the vehicle belonged to a Nigerian royal father, the smuggler faked its plate number to read: Oba Ponbayi, Onisanlu of Isanlu Kingdom.

“And Oba Ponbayi does not exist also. It’s just a combination of names from different parts of Nigeria,” Sadiq said.

The Customs boss said that the suspects fled into the bush as the officials closed in on them.

The vehicle was among 36 others impounded this year by the customs at Seme-Krake border, Sadiq said, as he took journalists round smuggled goods, food stuffs, clothes, drugs and beers.

“They are expired and do not even have NAFDAC number on them,” Sadiq said as he displayed the dangerous packs of Artesunat.

“Those who drink beer should also be very careful,” the Customs boss said as he displayed fake covers of Guinness, a popular beverage drink.

“Though this signifies an increase in revenue collection however, we are not satisfied as we are working assiduously to meet our half year revenue target of N4.2 billion.

“It is worthy to note that this command’s highest monthly revenue collection in recent history was collected in the month of May 2012. This command collected the sum of N997,585,453.37 in the said month and our zeal to collect much more remains unquenchable,” Sadiq said.

Sadiq said that during the period trucks compliant with Ecowas Trade Liberalisation Scheme (ETLS) goods with a CIF (Cost Insurance and Freight) value of N4,177,118,680.01 were cleared in the command. But because of waivers and some Federal Government’s privileges granted to some countries, companies or organisations, the command lost N1,176,786,072.41 while the one percent CISS (Comprehensive Import Supervision Scheme) revenue amounted to N37,554,018.00.

“The revenue loss is the money we should have collected but did not. It is not embezzlement as some people have said, it is a government policy to maintain good rapport with our neighbouring countries or in forms of waivers and so on,” Sadiq said.

The Customs boss said that due to the Federal Government policies aimed at boosting the export of made in Nigeria goods and foreign exchange earnings the export section has not been generating revenue.