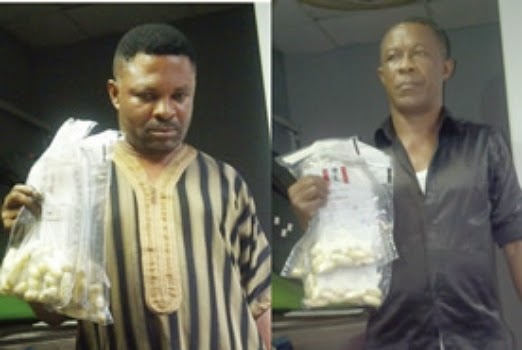 49-Year-old Fred Obi was about to board an Ethiopian Air flight from Abuja to Tel Aviv, Israel with a strange cargo allegedly concealed in his stomach when the law caught up with him. He had ingested 1.594kg of cocaine.

But he was not the only one boarding that same flight with the intention of transporting narcotics they had ingested on November 22, 2014 when they were arrested by men of the National Drug Law Enforcement Agency at the Nnamdi Azikiwe International Airport, Abuja.

NDLEA spokesperson, Mr. Mitchell Ofoyeju, confirmed that the raid which was headed by the agency’s commander at the Abuja Airport, Mr. Hamisu Lawan, would turn out to be a revealing one.

The suspects, who were said to have been arrested and isolated, were soon made to excrete the drug they had ingested.

“The last of the suspects eventually finished excreting the drugs in his stomach this morning (Thursday, November 26),” Ofoyeju said.

All the suspects, except Obi, were said to have Hong Kong as the destination on their tickets.

NDLEA Chairman, Ahmadu Giade, said that the arrest of the suspects was an added victory to the war against drug trafficking in the country.

He said, “Coming at a time when commanders of our agency are holding a summit to move the agency forward, this is a welcome development.

“Having seven suspected drug traffickers on a single flight is a reflection of the desperation of drug cartels.

“But this will prove to them that the NDLEA has the capacity to stop drug trafficking no matter what method they employ.

“Fortunately for the suspects as well, our arrest has saved their lives because for the suspects heading to Hong Kong, it is clearly stated in their visas that drug trafficking in Hong Kong attracts the death penalty. Nigeria has equally been saved from an embarrassment their arrest would have caused if they were caught over there.”

Meanwhile, the NDLEA has been urged to concentrate on intelligence gathering to identify the sources of wealth of drug barons and stop them from gaining control of real estates, banks and other legitimate businesses in the country.

In a paper titled Establishing an Intelligence Database: Process and Importance for Sustainable Drug Control delivered at the 2014 Command Officers’ Summit in Kaduna, the state Governor, Mukhtar Yero, called on the agency to seek elaborate collaboration with stakeholders in the war against narcotics.

According to a statement by Ofoyeju, Kaduna State has presented a bill to the state House of Assembly to prohibit the abuse of lawful substances like Zakami, an intoxicating local plant said to be used by youths in the state.

Giade said, “Drug barons are constantly devising new ways of smuggling drugs to markets around the world. Most significantly, modes of drug concealment have assumed a more sophisticated pattern. We must continue to embrace change and maintain our superiority ahead of drug syndicates.

“Let us identify better, faster and innovative ways of getting a task done. Let us learn how to prevent and manage crisis. Let us identify barriers to effective training, anti-drug abuse counselling, information gathering, diligent prosecution and proffer solutions on the way forward.”

Truck Driver Beats Neighbour To Death In Kirikiri Town Lagos While Defending Wife
Fayose Insults Obasanjo, Calls Him An Ex-Prisoner, Tells Jonathan Not To Lobby For His Support