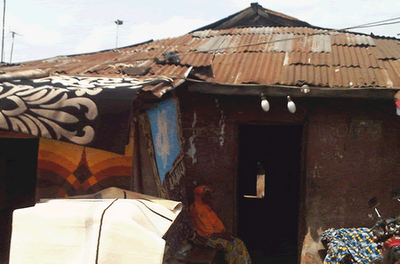 On November 1, 2014, Sunday Orochendu, a truck driver re­ceived a distress call from his wife, Ndidi. He was told that their neighbour had assaulted his family members. Determined to play the role of a man who should be known for standing for his family, Orochendu raced home. Unfortunately, what was supposed to be a warning resulted in the death of Mr Ralph Okey Mgbodile who he alleged assaulted his wife.

Saturday Sun gathered that the incident, which occurred at their 30, Mangbesa Street residence in Kirikiri town, Lagos, started when the deceased’s last born defecated at the entrance of Orochenedu’s room. This sparked a hostile reaction and insults from the wife of the suspect.

On getting home, Orochendu in an at­tempt to defend his family went into a fight with the late Mgbodile. They were, howev­er, separated, but Mgbodile did not recover from the beating he got as he slumped and died minutes after the fight.

Policemen attached to Kirikiri police station detained Orochendu while his wife, Ndidi, escaped to an unknown destination. She was later fished out by the policemen attached to the Special Anti Robbery Squad (SARS), of the state police command, Ikeja, who were detailed to find her.

At the police station where she is be­ing detained, Ndidi claimed that it was the thought of being lynched that made her flee the compound when it became obvious that her neighbour, Mgbodile had died. “I was terrified that angry neighbours could kill me. I have five children and cannot afford to die because of an issue that I contributed little or nothing to”, she stated.

She recounted that all she did was to tell her husband to reach out to their neighbours and warn them to respect her. “On Novem­ber 1, 2014, I was cooking in front of our door as that is the only available space in the compound for tenants to cook. Suddenly, Mgbodile instructed his son to stay in front of their door and defecate. I pleaded that I was cooking and that he should be relocated to another place. He told his son to ignore me. He asked me to go and build my house if I wanted some privacy. I felt bad because no person who witnessed a man defecating in front of a place where his food is kept will find that food edible”, she narrated.

Although she was very angry, Ndidi claimed that she managed to control herself and walked into the room to call her hus­band. “My husband was not in the house at that moment, so I called him on phone. Minutes later, he returned and went straight to confront our neighbour. I was in the room because I do not want to be seen to be in­truding when men are discussing. I was hearing voices as they came out to the pas­sage. It was then that I saw Mgbodile slap my husband, but as a gentleman, he refused to retaliate. The neighbours, who had gath­ered, were able to separate them. Mgbodile moved to his door and was about to pick something from the floor when he slumped. We were shocked when it was confirmed that he is dead.”

Seriously defending her husband, Ndidi said that her husband is not the aggressive type and cannot hurt a fly. “In the history of our marriage, my husband has never raised his hands at me. We have lived for more than 14 years in this compound and neigh­bours can testify to the fact that we do not quarrel. He is a unique trailer driver. I don’t know what actually went wrong with him, that my husband had to pay dearly for.”

Trying to justify why she went into hid­ing when she heard that her husband had been arrested, Ndidi said it was out of fear. “I was warned that the children of the man could kill me. I kept in touch with my in-laws and they told me not to worry. They were the ones that told me that he is now re­manded at Ikoyi prisons. I have even gone there to see him. He told me to be strong, that God will see him through. My husband is innocent, only God knows what killed that man”, she said, wailing.

While Ndidi is hoping and praying that her husband and herself should be released, Mrs Nnenna Mgbodile, whose husband died, is lost on what to do with her five children. “I don’t know what to do? I don’t know where to start. Who will help me to train these children? If life was better for us, we will not be living in this type of house,” Nnenna, who is a petty trader, sobbed.

Still finding it hard to control her tears when Saturday Sun visited their house in Kirikiri, Nnenna said her only wish is that the killer of her husband should not go un­punished. “Our greatest challenge is that we do not have money for the autopsy and the police said that this is the only way the true cause of death can be ascertained.”

At that point, her first daughter, Jennifer took over the narration of the story behind the sudden death of her father. “It started about 12pm, the lady opposite our room by name, Mrs Ndidi Orochendu was cooking at her doorstep while the last born of our house was defecating in a bowl at our side, as there was no other place for him to go to toilet than that place. She was angry, but it was not the first time as that was the place he had been going to toilet since he was a child.

“She started shouting at my dad be­cause he was around and inside at that time. I was sleeping and started hearing noises, listening to the insults that she hurled at my father. According to her, she said that she and her husband could not eat my brother’s feces. The problem is that we don’t have a backyard. My dad called me and sent me to buy toilet roll that I would use to clean up my brother. I did that and hurriedly cleaned him up but she was still shouting, waiting for a reply from us but we did not respond.

“I thought it had ended there, but she started telling people around what had happened. She later stopped for a while. Around 4pm, my dad dressed up and said he was going for a meeting and that he will return late because he would watch a football match from there. I myself went for a choir practice at my church. Getting back at night, my kid sister was the one at home and she told me our dad was outside receiv­ing fresh air as that was his normal practice whenever he comes back from work. My sister called him to eat his food but he said he was coming because he was still dis­cussing ball. That night, she was outside also discussing the issue with a neighbour, Mama Queen. Those who were friends with her were telling her to fight, knowing full well that this man’s family especially the children could not defend themselves.

“She called her husband who was meant to go to work. I don’t know what she told her husband, who came out and con­fronted my father. My dad told him that he would have at least asked him before trying to fight. As my father was still speaking, he punched my father on the stomach. People were around even though they denied it; I don’t know why they did not separate them. Though some people said the man used stick on my dad, some said he slapped my dad. It was then a man came and separated them. He moved away from the scene stag­gering, looking for his slippers and that was when he fell face downwards to the ground and died. This happened around 10:30pm. We did not know he was dead that night till the next morning.”