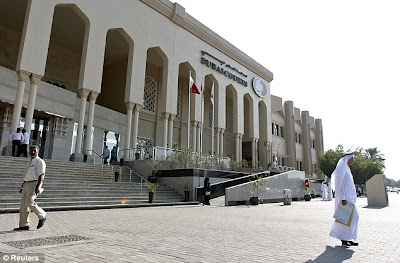 A gang of eight members, seven of them Nigerians has been arrested by the Sharjah Police in the United Arab Emirates accused of a string of robberies from safes in Sharjah, according to the Gulf News.

The eighth suspect is from Bangladesh.

The men were arrested on suspicion of being involved in a series of thefts in automobile spare parts companies located in Sharjah’s industrial, an official at Sharjah Police said on Saturday.

Police formed a team to investigate the case after owners of companies lodged complaints stating that the safes in their firms were burgled at night and items including cash as well as automobile spare parts were stolen from the premises.

The police team inspected the companies and gathered evidence which helped them track down the suspects.

Police suspected a Nigerian national living in Dubai, and in co-ordination with Dubai Police, they arrested him. He confessed that he along with eight accomplices, carried out the thefts in the Sharjah Industrial Area.

The suspect gave police personal information about his accomplices, including one who had fled the country.

An emergency police team raided the homes of the suspects and arrested them. They also prepared all the procedures to arrest the one who fled the country.

During the raid, police officers confiscated the tools used by the gang to carry out the thefts.

The suspects confessed to their crimes and have been referred to the public prosecution.(Source:PM)

When will some Nigerians stop disgracing their motherland by engaging in these kind of demeaning activities all in the name of money?