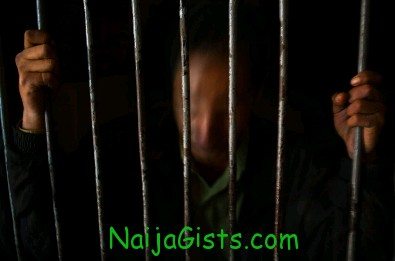 Kano State Police command confirmed the arrest of a Nura Hamza, a man who claimed he is a 700-year old spirit. naijagists.com

Nura who has duped a man of N8 million was arrested and a probe is ongoing on his secret acts.

He was arrested at his residence in Kurnar Asabe quarters after a complaint from one of his victims.

According to the state police Commissioner, the suspect had told his victim on the phone he was a 700-year old spirit, he then demands he can only be met in a nearby forest.

He later directed his victim to get money and take it to a nearby bush for spiritual duties.

“When his compound was searched, the following exhibits recovered. Seven pieces of fake $100, three bundles of cut-to-size papers with pretext to be $100, four MTN SIM certificates, three motorcycles, generator and one mobile phone.”

The man had earlier paid N800,000 to Hamza as directed, but later told his family members about the situation.

The CP said, “This culminated in the arrest of the suspect after luring him to the destination.”(dailypost)

This victim is a dumb man.

How can you believe such a lie? 700-year-old what?