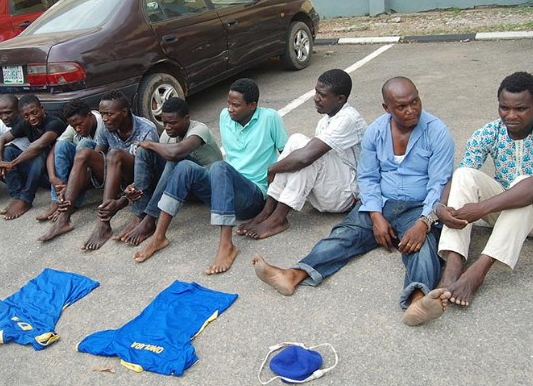 A Magistrates’ Court in Ile Ife today ordered that 8 men, be remanded in Ile-Ife prison custody for allegedly belonging to a proscribed group, Eiye confraternity.

Magistrate Olalekan Ijiyode, who gave the ruling, asked the counsel to the accused, Messrs Niyi Akole and Ben Adiereje to come with a written application for their bail.

Ijiyode ordered that the accused be kept behind bars pending the advice from the office of the Director of Public Prosecution (DPP).

He said that his court lacked jurisdiction to try the accused and they would be arraigned in a proper court of law.

The eight suspects are facing a three-count-charge of conspiracy, engaging in secret cult society and possession of dangerous items.

The Police Prosecutor, Insp Christian Olajide, told the court that the accused committed the offence on July 12 around 2:30 p.m. at Ita-Olopo House, Igbotapa Area, Ile-Ife.

Olajide said that the accused conspired among themselves to commit felony to wit: being members of an unlawful society.

The prosecutor said that among the dangerous items found on the accused at the point of their arrest included: UTC axes, charms, cutlasses, among others, which they could not give a satisfactory account.

The case was adjourned to Aug 31.