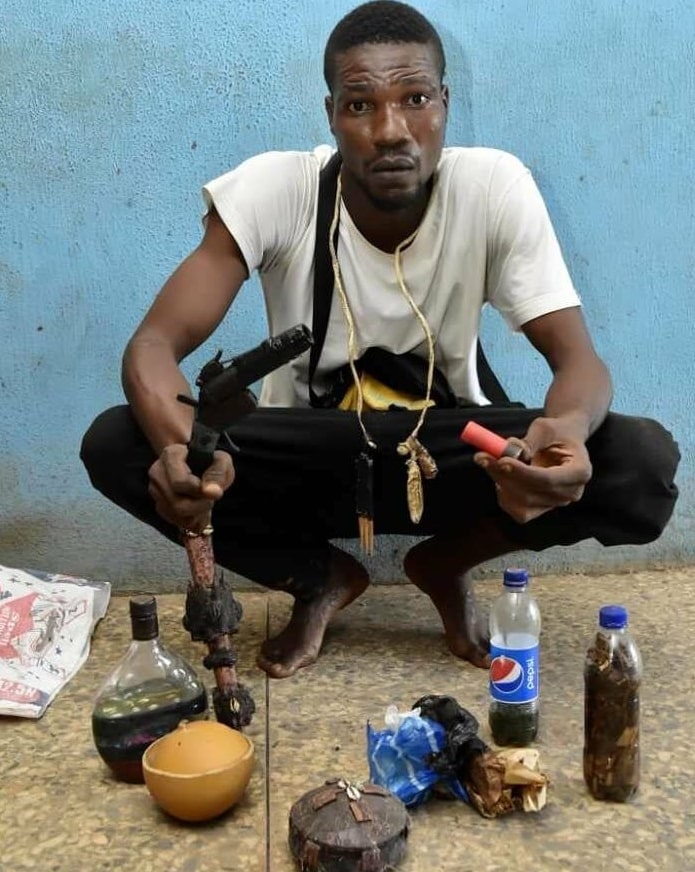 A notorious cultist threatening the peace of residents of Ifo and Abeokuta has been nabbed by the men of the Ogun State Police command.

According to the state’s Police spokesman, Abimbola Oyeyemi, the suspect was arrested from his hideout on Saturday around 1:30am.

Here is what Oyeyemi disclosed in a statement in Abeokuta Ogun State today;

“The suspect, Rotimi Adebiyi a.k.a Paracetamol, who has been on the wanted list of the command over his role in several cult clashes in the state which has led to the death of some members of another cult group was arrested by CSP Olanrewaju Kalejaye led SWAT operatives in his hideout at Ifo area of the state”.

“The suspect, a leader of Eiye cult group used to come to Abeokuta metropolis to strike and run back to his hideout in Ifo”.

“The police operatives acting on credible intelligence, stormed his place at about 1:30 am of Saturday 30th of April 2022, where he was apprehended”.

Other items recovered from the suspect includes different criminal charms, Indian hemp, cutlass, a live cartridge and a locally made pistol.

“We Are Boko Haram Members, We Work For Ritualists & Kidnappers…. Nigeria Belongs To Us”
3rd Mainland Bridge May Day Accident: 4 Killed, 5 Injured As Speeding Bus Somersaulted