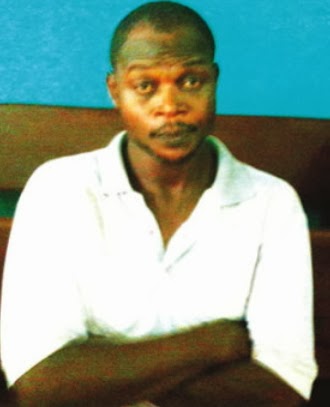 A 42-year-old father, Pedro Anegbe, has told an Ebute Meta Magistrate’s Court that a spirit asked him to rape his 15-year-old daughter to get a job.

He said the voice ordred him to rape the girl shortly after he lost his job and was idle at home.

Anegbe was arraigned on two counts for defiling his 15-year-old daughter (name withheld) at their home on Ifelodun Street, Fatolu Ipaja, Lagos State.

The Investigating Police Officer, Sergeant Bakare Murtala, told the court his findings in the course of investigation.

Murtala said, “The defendant is the biological father of the girl. She told us her father had sexually harassed her. We questioned him on his daughter’s allegation and he confessed to the crime. He said he had raped her twice.”

The magistrate, Olanrewaju Olatunji, asked Anegbe why he raped his own daughter.

The father of three said, “I am actually living with my wife and three children. I have two girls and a boy. She is my first born. I have had sex with her just two times. The first was on January 27, 2014. But I cannot remember the date of the second one.”

On how it all began, he said, “I did it because I thought it was God talking to me, but later I knew it was an evil spirit. The voice said I needed power. To get the power, the voice said I must damage some things.

“I started destroying the clutch and brake of the vehicle I was given to drive. Then the voice told me I should stop delivering money to the owner of the vehicle after each day’s work. I stopped and I was sacked.

“I became idle after I lost my job. The voice came again, saying I should have sex with my daughter or else I would not get another job. That was why I slept with her.”

However, despite his admission, the defendant pleaded not guilty to the charge of rape.

He also told the court that he wanted his case tried at the High Court.

Olatunji said, “You have confessed that you raped your daughter, why then did you still say you were not guilty of the crime after the charge was read to you? Don’t you understand the charge or what is the problem?”

“I am just forcing myself to talk, because the voice said I should not say anything,” Anegbe said.

His defence counsel, Rasaq Adeyemi, citing Section 115 of the Law of Lagos State, Nigeria, 2011, prayed the court to admit him to bail in liberal terms since he was still presumed innocent until proven guilty by the court.

In his ruling, the magistrate said, “This is a bailable offence, but it is a family matter. The defendant is to be remanded in prison pending legal advice from the Directorate of Public Prosecution.”

Continue Reading
You may also like...
Related Topics:daughter, Father, spirit