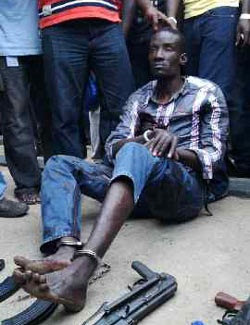 Abiodun Ogunjobi popularly called Abbey Godogodo who claims he has been robbing for over 14 years  was caught in his mansion in Ibadan after policemen laid ambush for him for close to 3 weeks.

The 36-year-old notorious armed robbery gang leader confessed he has killed several policemen during his operations.

He said he has no regret killing them because it’s a form of revenge for killing his boys.

Read his confession to Vanguard below;

I started robbing  in 1996. I have  spent more than seven years in prison. My prolonged stay in prison for a minor crime of fighting hardened me and I vowed to pay back the police for that injustice.

“After I was released, I went to Katangua, in Iyana-Ipaja area of Lagos to meet my friend, Odun, who was arrested by the police recently at O4 Hotel in Ajah. Odun was an armed robber then and we started operating.

“We worked with several other gangs and I invested the loots  in purchasing arms. I have built five houses in Ifo, Ilaro, Ikorodu and Ibadan.

“I usually kill policemen and take their rifles because policemen have killed several of my boys and taken most of our rifles from them.

“I have no regrets for all I have done and I have no advice for young people who want to become armed robbers like me.

“I have three children from three women. The police should take all my property if they wish.”

Abbey Godogodo was behind the brutal murder of several people at Q4 hotel in Ajah, Lagos on the 7th of July 2013. His boys killed Mr Olanrewaju Subair, the hotel owner.

They also killed the security guards working at a popular hotel along Apapa Road in Ebute Metta on the same day.