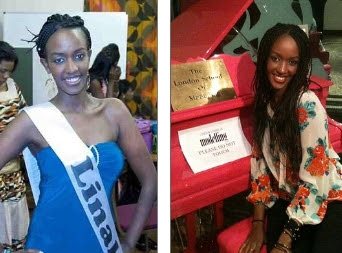 According to police report, the model was killed with a knife in the presence of her 3-year-old daughter who watched her murder and cried in horror.

A 38-year-old man identified as David Giwaka has been charged in connection to her murder.

Linah’s family and friends described her brutal death as painful.

Here is a beautiful tribute by her brother based in Uganda.

When we were growing up, she was very smart, very helpful, very loving – just like any other African child.

“Even though she was in the UK and I was in Africa, we would talk every day. We spoke on Facebook, we used WhatsApp, we would call – we were always in touch.

“She would tell me her worries, her excitement – she would always open up to me as her big brother.

“It really pains me that I was not there for her at the time she was killed.” – said her brother, Jack Hodari to Sky news

Linah Keza’s killer, David Gikawa is set to appear in court on tomorrow.

The deceased was found with multiple stab wounds at her house in King Edward Road, Leyton, East London in the wee hours of Wednesday, July 31st, 2013.